After hearing nothing but good things (mostly on Orangette) about All About Braising by Molly Stevens I finally decided to buy it in time for making lots of good warming Winter food. I had a flick through it this morning and was starting to mentally mark recipes to try when I paused over a recipe for braised leeks.

I left for work (with this in my bag) and through the morning stayed focused (fixated) on the idea of leeks for dinner. I hadn't made a note of the recipe but decided to have a search around blogland to see if anyone had. No joy but then I remembered reading one of Molly's articles in bon appétit. She had made a leek tart using a recipe of leeks slow cooked in butter and sure enough there it was.

It was a method of cooking leeks which delivers a tangle of sweet buttery deliciousness. I added some thyme when I cooked the leeks, fried some chopped smoked streaky bacon, tipped it all into a pan of cooked fusilli, added some freshly ground black pepper and a little parmesan, and dug in. Twice. 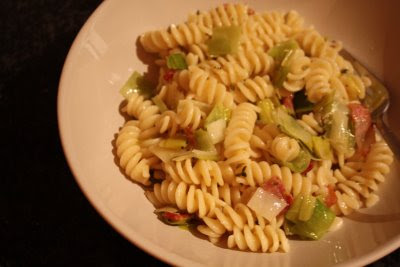 I'm already planning on cooking a big dish of these and using them in any way I can think of, maybe starting with just standing over the hob with a fork. First though I have a dish of leftovers in the fridge and lunch tomorrow to look forward to.
Posted by Gemma at Tuesday, November 18, 2008

Oh this looks delicious. My mum does something like this with leeks but she keeps them whole (with ends trimmed of course) while she braises them. She then serves them at room temperature with a vinaigrette which has a little chopped hard boiled egg in it. Yum! x

"...and using them in any way I can think of, maybe starting with just standing over the hob with a fork"
- now this is what makes me HAVE to try it!

I love simple recipes like this, leeks are one of my favourite vegetables too!

This looks wonderful - and leeks and bacon make a fabulous pasta sauce :)