Brian's photos for Fort Standard (and everything in them)

And some Steely Dan to send you on your way.


Today I would rather be...

Watching 'Her' and reading this about how a photograph inspired a film.

I read this excerpt from Molly's talk at Food Blog South while I drank my coffee this morning. I thought about it while I was in the shower. I sat on the edge of the bed and wrote a scrappy version of this post rather than getting dressed. It stayed with me.


'But a lot of the time, to be honest, I’m disappointed. I look at something I wrote last month, and I wish I could have done it better. Maybe you know that feeling. It’s uncomfortable – it’s awful – but I’m trying to teach myself a different way to feel about it. I’m trying to see it differently. I’m trying to see that discomfort as a good thing. We’re all in this together. We’re all uncomfortable. I can only do the writing that I can do that day. You can only take the picture that you can take today. Tomorrow, with work, maybe I’ll be a better writer, I hope. God, I hope. Tomorrow, maybe you’ll be a better writer. Or you’ll be a better photographer. Or you’ll make a better recipe. The key is in the act itself, in the fact of showing up and doing today’s work.'

I've always been scared of getting things wrong, of failing. Happier to say I don't know rather than risk a wrong answer, good at reading and listening in language classes but terrified of speaking and making a mistake. I was good a high jump for a few days until they had to pick teams for our school sports day; up against the girl who was on all the teams, who ran, who played tennis, I froze. Now, thankfully past those school days, it is still there. Creative ideas stifled in case the reality falls short of the dream, classes that should be be fun, are fun, but where I have been told to stop looking so nervous (by the lovely Yotam Ottolenghi in one case). I think a slight look of terror is my default setting whenever I try something new, it's no coincidence that my biggest problem learning to drive was hesitation.

But there are moments when it works, moments when I don't add that anxious 'but'. An exercise class that I had been tempted by for years that I finally joined in January; reasoning that I would be one of many among the New Year's resolution crowds. I wasn't, it didn't matter at all and I've been back each week since, I'm not sure what I thought would be so terrible about those 45 minutes as the new person.

And then there's bread. 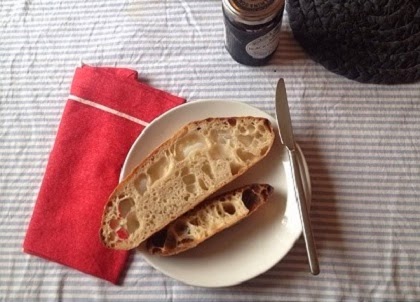 I knew the bread that I wanted to make. Crackly crust, air holes, well baked, an even shape. But the odd loaves I had tried in the past weren't quite there. I bought books and kept meaning to try again but those failures, the loaf that had to be sawn off the baking tray, the time when I guessed rather than weighed the salt, weighed me down. Until I bought a book on a friend's recommendation (a book that I had resisted thinking of those other books and the unmade loaves) and the basic recipe clicked. Until I went to a slightly oddly conceived but well executed show involving the author, a medical student wearing a Shetland jumper, baking stollen in front of a small crowd in a comedy club. Until I went home clutching a little clingfilm twist of sourdough starter that was given to almost everyone there. Until I got home and fed that starter knowing that if I was ever going to make sourdough this was the time.

I thought, briefly, that I had killed it. One type of flour turning it ripe, boozy, alarming. I poured most of it away and coaxed it back from the brink. I've made a loaf with it every week since. The first was pretty good, each week gets better, each time it feels like magic, that flour, water, salt can do this, can rise, can turn into bread, bread that I'm actually happy with, proud of. There's a metaphor somewhere in there.

Brian came to stay last weekend. I baked a loaf of sourdough on Saturday morning and we ate most of it for lunch, the rest for breakfast on Sunday. I baked again on Monday, sourdough, a little rye flour, hazelnuts, sultanas. Building on the foundation that I have been practicing. There's that metaphor again. I need to remember it. I need to keep building. 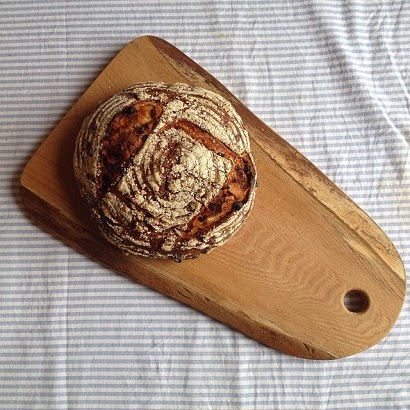