It's been a very Edinburgh kind of July. We get a day, maybe two, of sun, then grey skies, rain, wind, and sometimes all of the above within the space of a few hours. On Tuesday I went from too cold to too warm and back to too cold. This morning I walked along the canal with my sunglasses on, stopping to take photos of flowers, ducks, a boat called 'Scruffy' before coming home to drink a cup of tea and make the sesame seed biscuits from Rachel Roddy's new book, 'Two Kitchens'. I've had the book for just under two weeks and this is the fourth recipe I've made, it's an immediate favourite and I'm sure I'll write more soon but, in the meantime, a few things I've been looking at lately...

This vase
These earrings
These rice krispie treats
This kitchen
This dress
And, most importantly, this film that I've been recommending to everyone... 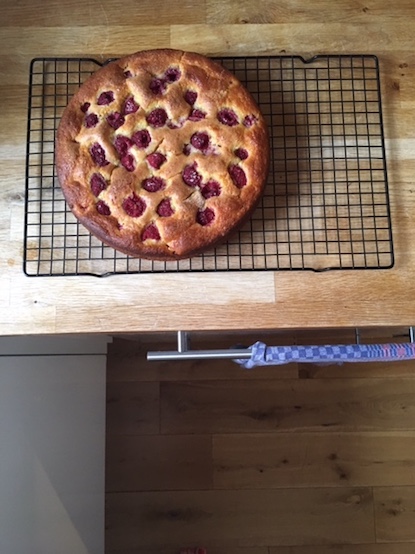 I turn 38 tomorrow. 37 has been an up and down kind of a year and I'm trying to give up attempting to predict what the year to come might bring but there are a few things I would like to do.

We went to Italy last month. It was hot, too hot really, in Rome. We saw sights but we also sought out shade, and gelato, at every opportunity. I hadn't realised how many water fountains there are in Rome but being able to fill bottles with cold drinking water whenever we needed to was a lifesaver. We stayed in Testaccio for 3 nights and spent a little time each day sitting on a bench under the trees watching people stop off at the water fountain to top up bottles, splash their faces, wash their hands.

On the Saturday we went to a bakery and bought slices of freshly made pizza bianca, the guy behind the counter slicing the whole pizza in half down its length, gesturing to see how much we wanted, before chopping it into chunks. We ate it on a bench opposite the fountain before heading to the market to buy peaches and cherries. Later that day, after a visit to the Sistine Chapel and St Peter's Basilica, we walked along the river to Trastevere. We had walked past Da Enzo the day before, recognised it from a friend's photo on Instagram, and decided that we would try to go. After a couple of drinks that evening we stopped by and left our name and then waited, and waited. Later, I'm choosing not to dwell on how much later because it really was worth it, we sat down and ordered carbonara, cacio e pepe, and wild chicory. But, and this would be a recurring theme, after eating about a third of what was absolutely the best carbonara I have ever had my appetite vanished. Apparently my body doesn't do well with feeling too hot and trying to eat much of anything at all which is a very sad place to be when you're in Rome. So, a few days later when we left Rome and headed for the coast we decided that when we return, because we absolutely will, maybe it will be in Autumn, or very early Spring. But the other thing I decided was that I really need to learn to make a proper carbonara.

So making carbonara is on my, not very long, list of things that I want to happen when I'm 38 list; as is conquering my hatred of creating foot rings in pottery. And, and I know I always say this but I'm hoping one day it will stick, I want to write more. Somehow writing a a few lines, here, or in a notebook, or on even on my phone, makes me feel like I have accomplished something even if those lines exist only in that place, in an imperfect form. Maybe it's a lesson I'm learning from pottery where I've been remarkably, for me, happy about my wonky pots, my imperfect glazing. Maybe the doing really is the thing.