This week there has been rain and hail and sun and wind and I've been too warm and too cold and then too warm again.

Amongst this there are a few things (apart from thoughts of Greece) that have made me smile this week...

Dan McCarthy's ceramics
Stevie
The best strawberry buttercream which made its way onto a cake for a colleague's birthday
This roller which I started using at the gym and which hurts my calves in a really good way
Twerps
Holiday nails
And finally, from this video, this screenshot of a young Fergus and Margot... 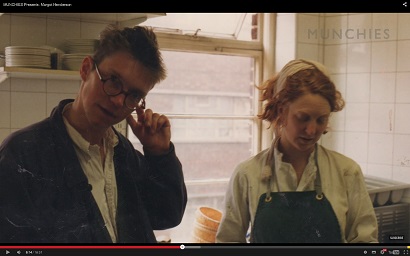 After a good Saturday, a busy Saturday, a Saturday full of walking, to breakfast, to town, to the Botanics, to Mary's, to Blackfriars, Sunday called for quiet. Coffee drinking, food shopping, Nashville watching, Marie Kondoing my drawers, and an urge to bake.

I thought I was going to bake a cardamom cake or some kind of plain cake, I considered Bara Brith or madeleines but eventually I settled on a biscuit that I hadn't heard of before, Cornish Fairings. Imagine a ginger snap but chewy from golden syrup, flavoured with mixed spice as well as ginger, we had one each as soon as they cooled, the remaining four came with us for lunch at the start of the week. I might make Bara Brith this weekend. 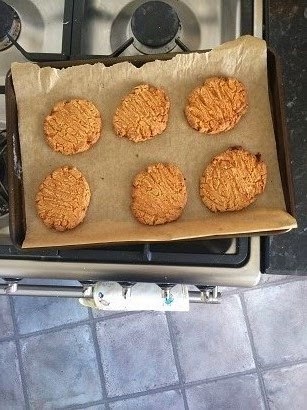 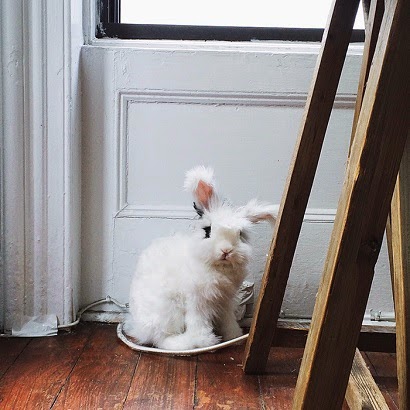 (Photo by Kimisa H. from Design*Sponge)

This week has been slightly up and down. But then there was the best bunny (which I'm not entirely convinced is real) and today there are new socks and the sun is trying even if it is still too cold for May. Tomorrow there will be coffee and pastries and I've got an urge to roast a chicken. But until then...

This rhubarb cake is speaking to me
Brandon's new pizza place makes me want to go back to Seattle (even more than usual)
Making the most of asparagus: panzanella or pizza
I might spend the afternoon listening to this while I work
Charlotte's photograph inspiring a thousand words
And, speaking of which, if you're in London this weekend can I suggest this

I grew up in Conservative country, where the only campaign signs around election time are blue, where Thatcher's time as Prime Minister was seen as a very good thing. But I moved away and quickly realised that I didn't want to be governed by those who care only about people just like them, that I didn't buy into the now pervasive rhetoric about 'hard working people' that suggests that if things are bad it's just because you aren't working hard enough; that says austerity is necessary; that the crash, that was caused by the irresponsibility of a small group of people in control of our money, should be paid for by those who have the least rather than through proper taxation of those who can most afford it. It makes me sad that anyone thinks the last five years have been working when we have a cardboard box in our office for donations to the local food bank, when people on housing benefit can't have a spare room because 'they can just move to a smaller house' even though no smaller houses are available because 'right to buy' sacrificed social housing in favour of individual gain, a pattern to be repeated very soon, a pattern that will see people being penalised because of a government that thinks the priority is abolishing the Human Rights Act, bringing back fox hunting, saying no to any increase in tax.

It makes me sad and it makes me hope that something will change in the next five years and there will be a better result the next time this rolls around. But until then we'll do what we can do and if you would like to do the same can I suggest starting here: http://www.trusselltrust.org/map

I voted this morning. In this increasingly close election where three leader debates became seven leader debates where people said a lot but none of them changed my mind. I'll be staying up for as long as I can tonight and keeping my fingers crossed and in the meantime...