We bumped into Robert on our way into The Bow Bar but we didn’t know that he was Robert then.

It had been snowing on and off all day, grey and cold but with nothing settling. By the time Chris came to meet me from work the pavements were all covered in a layer of slush, just icy enough to require the slightly stiff-legged walk we do when trying not to fall.

We made our way to Victoria Street, slipping a little as we went, seeing how busy it was as soon as we reached the steamy pub windows. At the door we passed someone taking off layers, he let us pass with a quick “don’t take the last seat.”

There was one small table left. All the tables in The Bow Bar are small; two legs, a top maybe 10 inches wide, enough for a few pints, maybe a bag of crisps. I sat while Chris went to the bar. There was a group of men to one side, students to the other. All had clearly spent a few hours getting to know the blackboard. The men started talking to me as soon as I sat down “here you go”, “are you here on your own”, “your glasses are steamed up, you need to give them a wipe”, I took them off and promptly knocked them to the floor, they were handed back by the man from the front door. He said something to Chris, put his paper down next to me and went to get a pint.

We sat like that for a while, sharing that last small table, Chris opposite me, the two of us chatting, the man from the door drinking his pint and reading the paper. I’m not sure if it was the students getting up to go or the men to my left becoming more obnoxious that did it but eventually we started to chat. I think it began with an eye-roll, the recognition that we were all thinking the same thing, there were a few words about the pub, the beers. We ended up talking for over an hour. It was about halfway through that the man from the door became Robert.We left him there when we headed home to make dinner. I don’t know if he went back to his paper or found more people to talk to but I know that we thanked him, sincerely, for the conversation, for the change to our routine, for the pleasure of finding out about someone else’s life. As we walked down the road we discussed how rare encounters like that are, how special when they come along.
Posted by Gemma at Thursday, January 31, 2013 1 comment:

Does everyone enjoy finding out what's in someone else's make-up bag? What they carry in their handbag? Which diary, the pen they love even though it was free and the top is all chewed, the half packets of tissues and crumpled receipts?

When I was about 12, so probably in 1992, I won a make-up set in a magazine competition. There was pale blue eyeshadow and and frosted pink lipstick and I adored it. Since then there have been  brushes with bad foundation, glittery eyes, and sticky lip gloss but now there is mostly this... 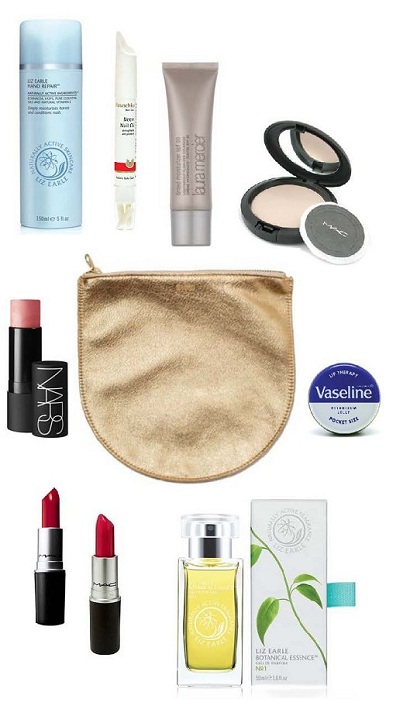 Clockwise from top left: Liz Earle Hand Repair, Dr Hauschka's Neem Nail Oil (whenever I remember), MAC lipsticks in Lady Bug and Lustering, Nars The Multiple in Orgasm, Liz Earle's Botanical Essence No. 1 (it took me a while to decide whether I liked it but the slightly old fashioned floral musk seems right at the moment), MAC blot powder in medium, vaseline, Laura Mercier tinted moisturiser in nude, and a Baggu medium gold pouch (I'm using a platinum one that I bought in June and it currently holds vaseline, a nail file, two plasters, powder, mascara, two pens, three lipsticks, ibuprofen, a hair band, two other lip balms, hand cream, chewing gum, and a penny. It may be time for a clear out.)

I'm yet to settle on a mascara and if anyone knows a good coral or orange lipstick then please do share.

I MAY BE SOME TIME

I always say that I'm a fast reader but not an especially careful one. I joke about it, say it's nice to leave a few surprises to discover on the reread of books I enjoy, and on the reread and reread and reread of books I really enjoy and which end up as my companions for days when I don't want the new, just the comfort of familiar characters, familiar worlds, familiar twists and turns, but the truth is that when I'm absorbed in a book I'm torn between being desperate to discover what happens and desperate for the story to just keep going.

I started reading A Game of Thrones last week. I borrowed it before Christmas, opened it on Tuesday night to read a few pages before going to sleep, and eventually went to sleep about 100 pages later.  I finished the first book on Sunday and started the second yesterday. Sorry other books, I may be some time...
Posted by Gemma at Tuesday, January 22, 2013 4 comments:

I'm jealous of all the snow further south. We woke up to clear skies and freezing temperatures and it has stayed that way all day.

The plus side of this is that our weekend plans are so far unaffected. We're heading to a friend's place in Fife for a couple of nights for cold walks on the coast, drinks in small village pubs, and maybe some fish and chips. Hope you have a great weekend whatever you have planned.

Hot, sweet, salty and a little bit crisp - World's best pancakes?
We bought two pieces from Stella over Christmas. Is it too much for me to want this guy too?
This fried egg sandwich is calling my name.
I'm fantasising about Summer holidays.
One day I'll be organised enough to do this.
Once upon a time I pieced together some patchwork squares. I may have been about 13. These make me want to try again.

For the last two Sundays I've made a list. Partly a shopping list; fruit, milk, things for our sandwiches during the week, and partly what we'll be making for dinner. Trying to plan up to Wednesday, trying to avoid the daily what's in the fridge, what do we want, falling back on the same mix of meals. Last week that meant trying Nigella's orzo with peas and pancetta on Monday and remembering to make double rice with our curry on Tuesday so that we could have fried rice for dinner on Wednesday. If there's one food related habit I want to stick this year then this is it. Such a small thing to plan for a few days, such a relief to go to work, come home and know that there is a plan.

I had planned to make lamb shanks tonight. Planned to settle them down with carrots and parsnips in the oven. Planned to sauté some greens, pour some wine, sit down with candles at the table for a comforting meal fit for a day that started with snow (it hasn't stuck but there should be more to come). I had thought about baking some of the cookies that have been living in the freezer since Christmas Eve, or maybe the sherry cake that Jess wrote about at the end of November. We were going to sit up trying to catch The Golden Globes, or at least some of the red carpet. We fell at the first hurdle. We should have gone to the butcher yesterday, should have known better than to expect Tesco to have the lamb we needed. We stood in the aisles trying to come up with alternatives, they all felt like a poor second-prize to the meal we wanted. The bolognese in the freezer, the cauliflower curry we eat almost weekly, sausage and mash... We decided to have a complete rethink, we decided on homemade pizza. A tomato sauce with garlic and thyme, mozzarella, shredded brussels sprouts, pancetta. I'm drinking a Campari and soda while the dough rests, Chris is having a gin and tonic while he organises music on the laptop, I'm trying to decide whether to bake or whether we'll have some of the brown bread ice-cream leftover from Christmas. Maybe we'll just have a cup of tea, dig into the party sized bag of pretzel m&ms that Mum bought us back from the States in October, and curl up to watch the red carpet.

Here's to six and here's to you, thank you for following along.