I found myself thinking about tonight's dinner rather a lot through the day. Not that this is unusual but tonight I knew just what I needed where often my thinking can be a little unfocused and finding a main ingredient to work around can be a hard enough decision. I needed some comfort and some warmth and that, coupled with Monday evening tiredness, usually spells soup. But I have recently been pondering different ways of using both squash and chickpeas more and this became a choice between something curried with rice or something vaguely North African with couscous. The soft blanket of a bowl of couscous won. I found a vegetable tagine recipe in How to Eat and tweaked a little to fit what I wanted. It was softly fragrant but tasty. It could take a heftier dose of spice and maybe another day that would be what I would choose, adding a good bit dollop of harissa at the end of the cooking rather than the mere teaspoon that I used tonight. As with the spices just use more or less of what you like. 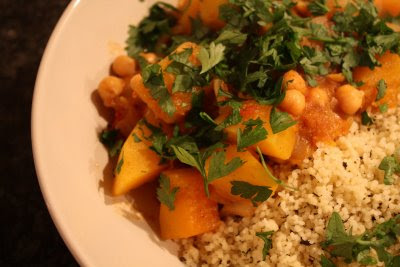 2 tablespoons of olive oil
1 onion, roughly chopped
2 cloves of garlic, minced
1 teaspoon of cumin
1 teaspoon of coriander
1/2 teaspoon of cinnamon
1/4 teaspoon of paprika
1 pinch of saffron
1 large butternut squash, peeled and chopped into 2 cm chunks
1 400g can of chickpeas, drained
1/2 can or 200g of chopped tomatoes
zest of 1/2 a large orange
500ml stock (I used marigold vegetable bouillon)
Salt and harissa to taste

Heat the olive oil in a heavy based saucepan over a medium heat, I used a le creuset casserole, and add the onions leaving them to soften for a few minutes. Add the garlic and all of the spices, stir together with the onion and leave to cook for a few more minutes. Put the squash into the pan and stir it so that the spices, onion, and garlic evenly coat the squash and allow this to cook for about five minutes. Add the chickpeas, the tomatoes with their juice, the orange, and the stock. Leave this to simmer over a low heat for 25 - 30 minutes until the squash is cooked through and starting to collapse around its edges.

If you are eating couscous with this and want to make it the lazy way then put about 300g of couscous into a bowl and cover with just boiled water. Cover the bowl tightly with tin foil and leave for about ten minutes. Uncover the bowl and fluff up the couscous with a fork. I like to add dried mint and a little salt to my couscous and it worked well with the flavours in the tagine.

Taste the tagine and add salt. If you want a little extra heat stir in some harissa. I would say just add it half a teaspoon at a time as harissa can vary a lot. The one I used was quite mild and a teaspoon just brought a little warmth, others may blow your head off.

Serve the tagine with some of the couscous and sprinkle over fresh parsley if you have some.
Posted by Gemma at Monday, November 03, 2008

I love Moroccan food and will be trying this. Bookmarked!

Hi Sam, I reheated some for lunch today and it was even better as the flavours had properly merged together so if you can stand to make it and leave it you should.

Good grief. I was wondering what had possessed me to buy a butternut squash and what on earth I was going to do with it.

And I have everything I need for this. That never happens. Fabulous.

Except harrisa. What is harissa?

Hi, harissa is a spicy North African paste. You can either stir it into things as it is or thin it down with some water to lightly drizzle over couscous or anything really. You can get it in most supermarkets. If you can't be bothered then just taste the tagine and if you think it needs a little something extra then maybe add a little dried chilli. Hope you enjoy it.

Mmm, this looks wonderful! I made chickpea and cauliflower curry earlier this year that was fab - who needs meat when you can have spicy vegetables??

Finally got a round toit and made this and it was fab.

My mother in law even had seconds. This has never happened to me before.

Thanks for letting me know Solnushka, I'm so pleased you (and your MIL) liked it. I actually fancy having this, or similar, for dinner again tonight.