What do you do on the hottest day of the year so far?

Do you find a nice shady spot outside to sit with a cool drink and read your book?

Do you find some water to paddle or swim?

Do you meet friends for a picnic in the park or a pint in a beer garden?

Or do you spend the afternoon watching football?

Do you put the oven on to make your already warm flat even hotter?

Do you question your sanity?

I don't think I need to go into how I spent my afternoon?

This morning I went to the market and found strawberries and fresh peas, tiny baby carrots and little bitty beetroots.

And the oven part isn't really all that crazy because what else am I supposed to do when I have been thinking about basil biscuits all week and imagining them with strawberries and maybe a smear of loosely whipped cream?

They had to be made, they just had to be.

And, after watching the football the need for something sweet and crunchy giving way to soft richness and fresh red ripeness was even more apparent. Thankfully the making part took just a few minutes, the baking part about 12 and the eating part? 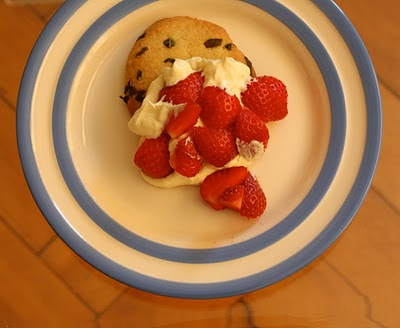 Lets just say, that didn't take too long either.

Cream together the butter and sugar and add the ground almonds then the flour. Knead together on a lightly floured surface to form a dough. Roll the dough in the chopped basil leaves until the leaves are well mixed into the dough and then roll it out into a 5cm diameter sausage. Slice into 1 cm thick slices.

Place the slices on a well greased baking sheet lined with non-stick baking parchment. Bake for 10-15 minutes until lightly golden. Remove at once and cool on a wire rack.

Eat on their own or with a dollop of lightly whipped cream and some strawberries.
Posted by Gemma at Sunday, June 27, 2010 6 comments:

I got home to the smell of barbecue in N16.

Last Friday we left a rainy London. We sat on the train and arrived in Chester.

On Saturday morning we left the hotel without jumpers and questioned the decision. We saw a little bit of the town crier competition and walked a short stretch of the walls. We headed back to the hotel to get ready for Nana's 90th birthday party, the entire point of the trip.

Eccleston village has houses with twisty curly chimneys. It's surrounded by green and bordered by the River Dee. And, on that particular Saturday, it had a village hall filled with my family.

Mum is one of nine so a party with all of the children, grandchildren, and great grandchildren, not too mention a few friends, was never going to be small. I saw cousins who seem to have gone from five to fifteen in the blink of an eye, I saw some I had never ever even seen before. Chris met them all, I think, mostly for the first time. We tried and tried to stay outside but that wind was still a little too cold. If only the sun had just stayed in place.

On Sunday the sun was shining and we drove to North Wales.

To the Lleyn Peninsula where my Grandparents used to live.

To where we spent our summers.

To where we waited out those frequent rainy days with games of Upwords and books. To where we played bedknobs and broomsticks on the old brass bed. To where we hid in the caravan at the bottom of the garden.

To where we befriended the local farmer who taught us to count to ten in Welsh and sat a very small me on top of a very big cow.

To where my sister found a sixpence on the lane and where I was jealous until I found a £20 note on the beach.

To where we would go through kissing gates and cross fields and insist that the calves were actually bulls but that we couldn't shouldn't run or they would get us.

To where we will always smile when we think of it. Of those idyllic summer days of sandy picnics, rock pools, cold cold water, and an equal mix of sunshine and rain. 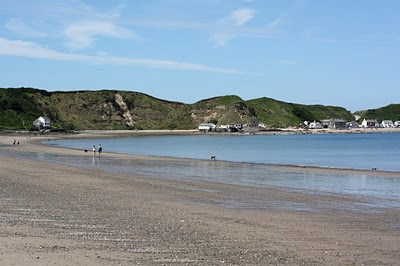 We spent Sunday on the beach at Morfa Nefyn. Walking along the sand to Porth Dinllaen, sitting outside Ty Coch with a cold beer and a view of the sea. We persuaded the children into the sea even though we were too warm in the sun to brave it ourselves. 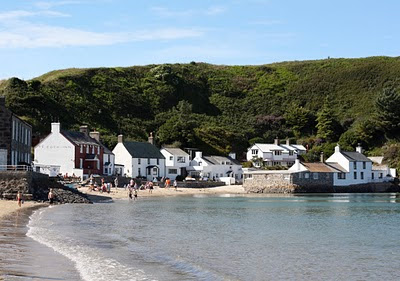 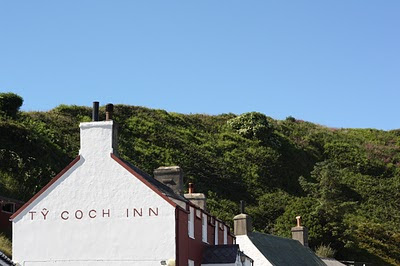 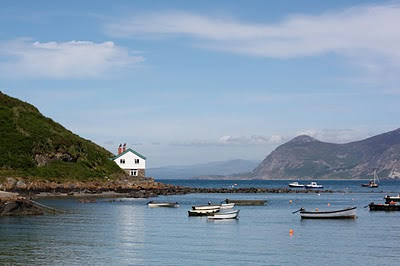 The sun went down on midsummer's eve. 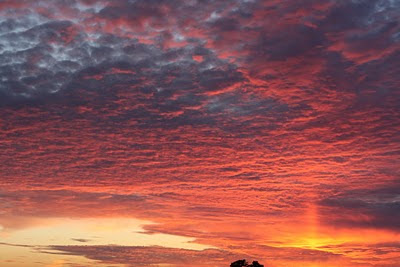 Monday came and we went to Nefyn and found an almost deserted beach. 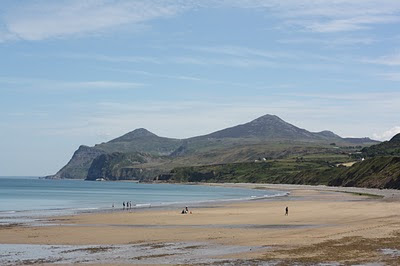 Where our feet sank into the soft sand and we dreamed about hiring a holiday cottage right on the beach and waking up to the vast emptiness. 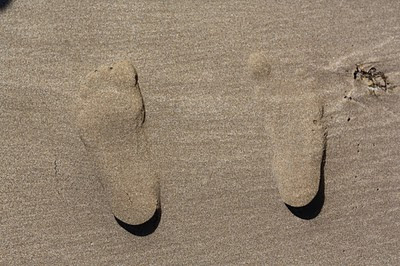 We walked to the beach hut where we used to sit and play, met the man who bought it from my Grandfather ten years ago. 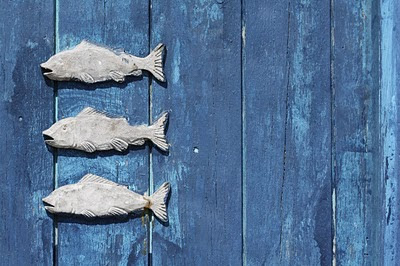 We played in the rock pools and realised that some things never change. We would have stayed there all Summer pointing out tiny hermit crabs, looking for sea urchins. 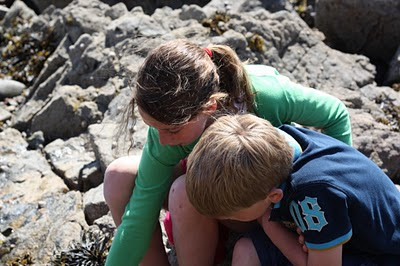 We picnicked back at Morfa Nefyn with sausage sandwiches and welshcakes. We paddled but none of us swam.

We dragged ourselves away and back to Chester to say goodbye and travel back to London and since then, since those two perfect days of Summer on the beach that weather, that sunshine, has stayed.

I leave the house with bare legs and arms and stay that way all day. We sit with all of the windows and the balcony door open. We wallow in the luxury of warmth.

And now it is Thursday and with Thursday came a quiet night at home for me. A quiet night with the smell of grilling meat in the air but a plan already formed. A quiet night of uploading photos, feeling the warm air around me, making a new dish. A Summer dish. Fusilli with zucchini and butter, it should possibly be butter and zucchini instead, it is buttery buttery goodness. Perfect for this day when Summer seems to have finally settled, at least for now.

Wash and dry the zucchini. Trim off the ends and slice into 1cm rounds.

Cook the fusilli in boiling salted water until al dente. Drain, keeping back a little of the cooking water to stir into the zucchini.

Mix the fusilli with the zucchini and serve with grated parmesan.
Posted by Gemma at Thursday, June 24, 2010 5 comments:

I love the heavy, but well-judged, hand with fresh herbs. Oregano, sage, mint.

I love the way that a hearty salad is given a lightening tough. Sumac, lemon juice, spring onion.

I love that I can link to recipes to my heart's content because they are all on The Guardian website (but will someone please tell me how I missed all these recipes the first time round? I buy The Guardian every single Saturday. Just idiocy I suppose).

Most of all I love how the food in this book tastes. 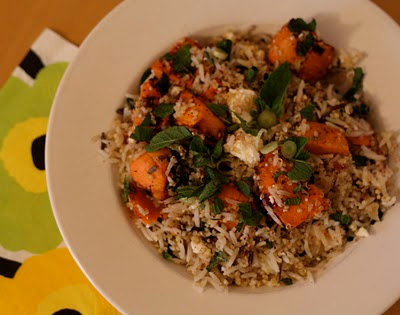 So, I suppose it goes without saying that I enjoyed the salad I made for dinner? The recipe is here. It isn't a particularly quick dish. It needs some shopping, some chopping, some juggling of pans and timings but when it is done, and you sit down with a bowl and a G&T and it all comes together into one great bit melange of yum, that post-work slicing and timing is worth it. So worth it.

Which is good because I have just made a recipe suitable for six people when I am the only one at home.

At least I won't have to think about what to have for lunch tomorrow.

On the other hand I will have to think about what to do with the dried limes I bought for this recipe which, I belatedly realised, needed to be ground with a coffee or a spice grinder.

I don't own a coffee or a spice grinder.

Those are the words you want to hear after making a new recipe for dinner.

Those are the words you want to hear when that new recipe comes from a new book.

Those are the words you want to hear when that recipe comes together simply, quickly, cheaply.

It's warming and deeply satisfying. We thought we could eat double but turns out this recipe was just right as dinner for two.

The flavours are soft, rounded, mellow but all present, herbal, swoon. 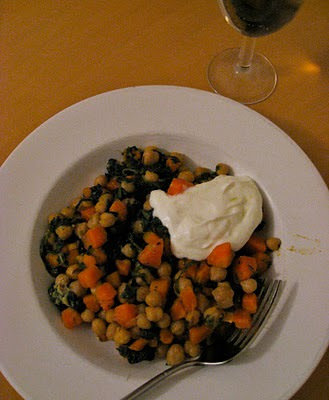 The recipe is here. I used spinach instead of chard which doesn't need to be blanched so I just started at the carrot and caraway part. 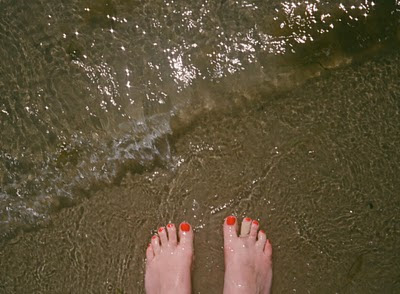 Dinner tonight didn't quite go to plan so I'll eradicate that memory with a better one of feet in cold cold seawater.