I just had a meeting sitting outside on the stoop to make the most of the bright sunshine that has finally appeared (although maybe just for one day).

Whether the sun shines on you or not, here are a few links for your weekend:

And, if you're in New York you should really be going to this exhibition.

Finally, because we all need to laugh at stupid things and because I only found this out yesterday, if you have an iPhone with Siri go and send yourself an emoji filled message and ask Siri to read it.

THE POTATOES WERE THE STAR


After attempting to buy lamb late on Easter Saturday and (seven shops later) failing, and after calling Chris (who had had to abandon the lamb hunt three shops in to go home and tidy up) while standing staring blankly at the supermarket shelves trying to decide what to make instead of the baked lamb with tomatoes and orzo that had sounded just right that morning, we settled on chicken. Margot Henderson's roast chicken with lemon potatoes and wilted watercress.

The watercress was a hit - a tiny bit of olive oil in a pan, add watercress, salt and pepper and stir until it just starts to wilt.

The lemon potatoes were the star.

We made it all again on Sunday just to make sure.

Peeled and halved (or quartered) waxy potatoes go into a roasting tin with some quartered tomatoes. You quarter a lemon and squeeze over the juice, then throw the lemon shells in with the potatoes. Next you add four crushed garlic cloves, a teaspoon of paprika, some salt and pepper and a hefty glug of olive oil. It all gets mixed together and roasted in the oven until the potatoes are caramelised and the tomatoes have released their juices and become jammy.

You eat a few potatoes, and then a few more, eventually sitting with the empty tin between you as you idly scrape up nuggets of crispy deliciousness, making sure that nothing is missed. 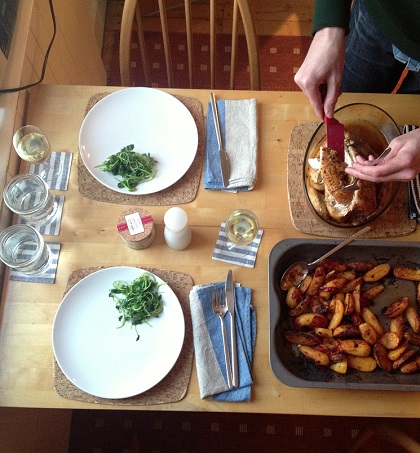