I'll just say it straight off, last night was lovely. There was nothing special, no going out, no seeing other people, in fact there was nothing to do but make some dinner, drink a reviving G&T (or two), and make up for the fact that our TV is still in Edinburgh by watching episodes of 'A Taste of my Life' on the internet (thank you BBC i-player). Have you seen this? Nigel Slater chats with people about their lives and their food memories. Last night we watched the episodes with Nigella and Sophie Dahl. The Nigella episode made me wish I was sitting eating with them and gave me a must try recipe of poached chicken with vegetables, rice, and saffron. The Sophie Dahl episode didn't make me as hungry but did make me a little jealous, not only is she incredibly beautiful but she is the granddaughter of the magical Roald Dahl who I credit with hooking me on reading from a very young age.

Prior to enjoying a spot of laptop watching we had a delicious and simple dinner. After not spending any time blog reading for a really long time I started catching up yesterday and in the process stumbled upon this recipe for sweet potatoes with a spicy olive and feta salad on 'Traveler's Lunchbox'. It seemed like exactly the sort of meal I wanted to make so off I went to the little Tesco near work to buy the ingredients but the only one they had was feta, not even a red onion to be found. So on the tube and over to Sainsbury's for a slightly more successful shopping trip but also some of the longest post-work supermarket queues I have ever seen. Anyway, shopping done and a bus journey home and I was ready to get started. I popped the potatoes in to bake, mixed together the salad ingredients, took a seat, waited for the potatoes to cook, split them, piled on the salad, and that was that. Easy and delicious and definitely one to be repeated in one guise or another. I'll just direct you to Melissa's page again for the recipe and for her photo as my attempt was pathetic and I was too hungry to persevere.
Posted by Gemma at Thursday, May 29, 2008 3 comments:

Last Thursday we came back to Earth with a bump after spending a week in one of the most beautiful places I have ever seen. Since then we have had people to stay so spent the, rather wet, weekend out and about before eventually realising that in almost two weeks we hadn't eaten a home cooked meal. I intend to start rectifying that very soon and have started to make amends with a few tasty but simple options that are not really worth writing about but were welcome just for the simple pleasure of eating food that wasn't chosen from a menu.

So, back to Santorini (I wish). After a week or so of beautiful weather in London we left a cold and rainy Gatwick (after a 4 hour delay) to arrive in sunshine. A, slightly too fast and slightly too scary, taxi to the hotel was made worthwhile by the first glimpse of the famous Caldera where we would be staying. An introduction to the cave house that would be ours for the week, and a change into summer clothes (oh joy), and we were ready to do absolutely nothing but look at the view, eat, and drink local wine. Santorini is the postcard view of Greece and I mean that quite literally, all those white walls, blue domes, and cats lolling about on roofs that overlook the sparkling blue of the Adriatic, it's all Oia, the small town we stayed in at the tip of the island. I recommend it to you all and leave you with some photos while I go and eat dinner, but more on that later (if it's good). 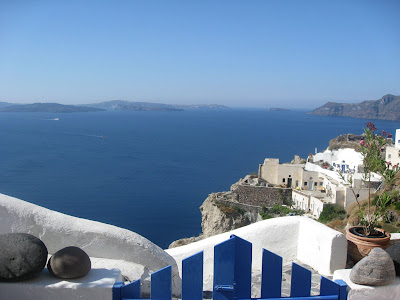 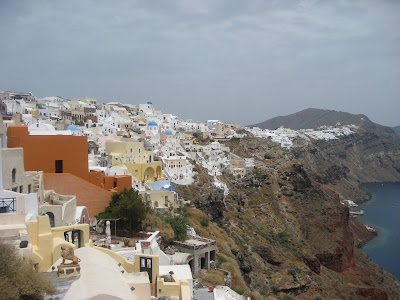 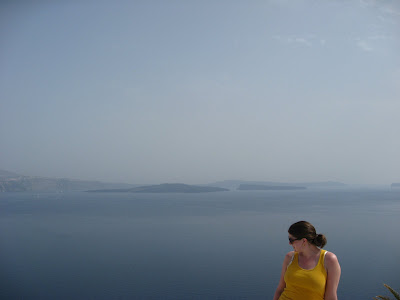 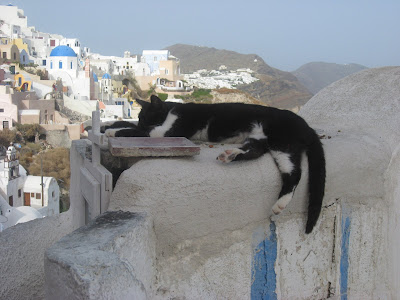 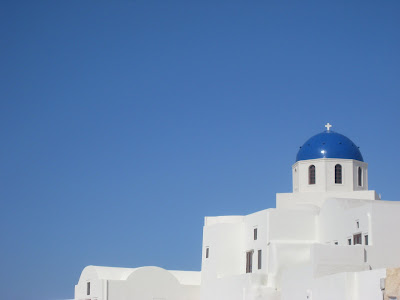 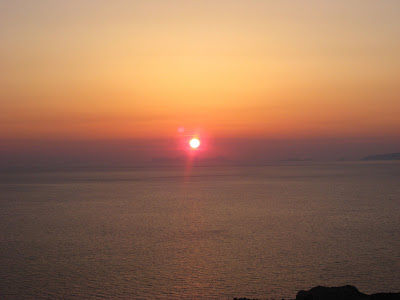 Well, I didn't intend to disappear for so long but since January life has been turned upside down and this feels like the first chance I have had to breathe and just be in almost four months.

For quite a long time we had been contemplating a move and after going backwards and forwards for an equally long time we both started to job hunt in London. So, shortly after my last post I had a few interviews and by the middle of February I had a job and then all of a sudden Chris did too. We spent a month packing boxes of kitchen paraphernalia, and any (large) number of books and records and headed south. From there on we had to contend with the flat rental nightmare of central London so stayed with our very patient friends (thank you all) and spent our free time eating in restaurants out of necessity, which gets very tiresome very quickly, and looking at flats. Just in case you're unsure moving 500 miles, starting new jobs and having nowhere to live really isn't that much fun and to top it all of it seemed to be the coldest April ever. Then, finally, the sun came out, we settled on the area we definitely wanted to live in (the decision helped along by an abundance of bakeries, small food shops, and Turkish restaurants), we found a flat, and as of last Tuesday we are in. Okay, so we haven't completely unpacked yet and all those boxes of books and records still need to be moved from Edinburgh but we can settle, briefly.

Last night we celebrated by taking ourselves off to Ottolenghi for plates of crisp salads, lemon sole, and king prawns. I would tell you what we ate in more detail but to be honest all I can remember apart from the taste is the bare bones of the ingredients and that wouldn't be doing it justice. It was delicious and relaxed and I would go again in a heartbeat although maybe for their renowned brunch next time if we can get through the door and only if you can have pudding after brunch because I don't think I would ever be able to ignore the counter overflowing with tarts, cakes, and meringues.

We are off on holiday to Santorini on Thursday but in the meantime I will be breaking out the pots and pans, opening up the few cookbooks that have been moved so far, and cooking.
Posted by Gemma at Sunday, May 11, 2008 8 comments: