My name is Gemma and I am a 27 year old cookbook addict. I'm sure this news won't surprise any fellow addicts out there and it definitely won't surprise my groaning bookshelves (or my groaning boyfriend). I made the brave deicision to count my cookbooks on Saturday and, while I had been curious about the size of my collection for a while, I wasn't sure that I was entirely ready to deal with the truth of it.

The final (until the next new purchase) tally:

Food writing. I didn't even attempt to count this category as they are all scattered around but a small selection includes Ruth Reichl, Jeffrey Steingarten, Hugh Fearnley-Whittingstall, and 'The Pedant in the Kitchen' by Julian Barnes, which is my favourite so far and is hilarious.

Finally we have the dull stuff, otherwise known as diet books. These were bought during various fat moments and have swiftly been relegated to the back of the shelves which is definitely where they belong.

The shameful fact is that far too many of these books have been read but not cooked from. I have my favourites but have been neglecting some of the trickier titles, such as Gordon Ramsey's 'Secrets' with all those scary towers of multi-michelined food. To end the neglect and to stop my guilt at all of these purchases I am promising to make at least one new recipe from every single one of my books by the end of the year. So a minimum of 67 new recipes plus any from new purchases. This is quite a scary thought and it leaves me wanting to scuttle back to the security blanket of Nigel Slater's roast chicken but then again the roast chicken in Bill Granger's book looked pretty tasty and maybe this will make me try those scary recipes that I keep putting off.

So the promise is there and last night I made a perfect start with a Valentines meal and two brand spanking new recipes. 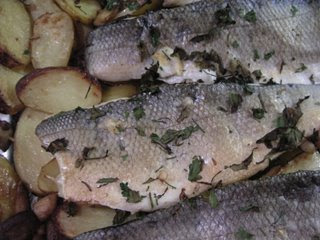 This is roasted slashed fillet of sea bass stuffed with herbs, baked on mushroom potatoes from 'The Return of the Naked Chef' by Jamie Oliver, he suggests serving it with salsa verde but that felt like overkill and I'm glad I resisted. I have never cooked sea bass before due to my irrational fear of fish cookery but it was delicious. The potato and mushroom mixture underneath was soft and slightly lemony and the sea bass had a delicate taste and texture that worked well with the basil and flat leaf parsley that I used for the stuffing. The only teeny tiny problem was that in the recipe the skin is slashed for the herbs but my fish was still covered in its scaly armour which was impossible to get through so I made some cuts in the flesh instead which worked just as well. I don't cook enough fish and this recipe reminded me why I should be braver about it, it also reminded me that I should use my Jamie Oliver books more as this one has been ignored for quite a long time. 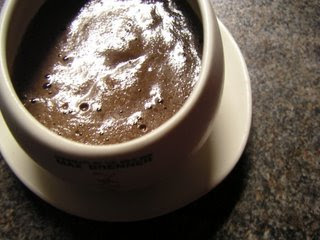 The perfect Valentines day pudding came courtesy of Jo Pratt and 'In the Mood for Food'. The recipe is for exotic chocolate pots and I used her tip to make them into mousses by adding a whisked egg white. The chocolate is flavoured with orange zest and allspice and was fab. I was also pleased to have an excuse to present a dessert in my Max Brenner hot chocolate hug mugs that were a 23rd birthday present.

So two books down and 65 to go but if last night is a taste of what is to come then it should be a good year.
Posted by Gemma at Thursday, February 15, 2007

Gemma,
I too have many books I don't actually cook from, but I figure if I get one idea I can use from them, then it is worth the price of the book. I find them more inspirational than instructional-interesting post, but your photos won't come up on my computer. There are only blank spaces with x's and their title.

Yes - I think I just need to get out of the security blanket rut of things I know too well and I am hoping that trying all those untried things will inspire me to be more creative. Thanks for telling me about the photos I'll look into the problem.

Gemma,
What a lovely menu for v-day! Of late I find myself with massive binders with sections of recipes I have printed out from online. Its actually fun to orgazine and holepunch them...the only problem is that I don't stop! I do like buying cookbooks, though, but I try and keep to the bargain section from Barnes and Nobles or I would be in big trouble! :)

Mmm... the fish looks good! so do the chocolate pots, which I also made, from the same recipe (only I didn't add the white and make mousse as I wanted to use my cutesy new espresso cups!). Check mine out on frompagetoplate.blogspot.com.

Bill's roast chicken is delicious, Gemma! Do venture forth. I have almost made nothing but new recipes since September and I love the variety. I am looking forward to seeing what you try out from your book collection.

Oh, and from Secrets, the salmon with a bacony sauce (cant remember the recipe title) is easy but delicious!!!

made a simlar resolution but slightly differernt - mine was to cook at last one new recipe a week, and to try all my as yet unused recipe books.

I have a feeeling there are some of them i just won't want to cook from (mainly ones people have given to me rather than I have bought for myself).


good luck with your endeavour

Hi Gemma, good luck with your new endeavour! It is good to set goals in the kitchen (mine is just to get the kitchen clean at the end of it!) and you'll have lots of fun doing it!

thursdaynext - yes I love an excuse to buy new binders for recipes, I just got two lovely ones but mine are a bit like photo albums, in desperate need of organisation!

Kathryn - thanks for the tip from Secrets. I looked at your chocolate pots and they looked fantastic too - I loved the cups.

Sam - Thanks, I also have a number of gift books that haven't been used but I'm sure (I'm hoping) that there are good recipes to discover in there.

Freya - Cleaning the kitchen is just a running battle for me - I particularly hate the oven! A more fun endeavour is definitely the way to go!

Hi Gemma
To my surprise, I counted my cook books recently and have almost 100! That includes about 30 paperbacks published by M & S (St Michael) and I used to buy one a month many moons ago. I even take them to bed with me. I do weant to buy Forever Summer (Nigella). This will be the final book??!! No.