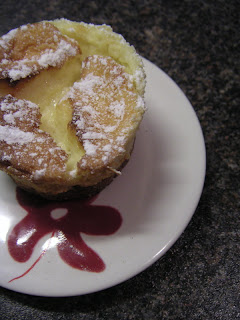 After much deliberation I finally decided to take part in my first sugar high Friday last week. It is being run by Jasmine at Confessions of a Cardamom Addict and the Valentines inspired theme was sweet seduction.

Being in a relationship with someone not terribly sweet toothed means that any dessert has to be carefully judged but a cheesecake always seems to hit the nail on the head. I have made the New York Baked Cheesecake from 'How to be a Domestic Goddess' a couple of times and, as the recipe feeds 12 people, I felt confident enough to try an adjustment in scale. Dishes made with seduction in mind are usually (well in my house at least) for two so a few individually portioned cheesecakes seemed ideal.

I am not a pro at recipe fiddling and twiddling so I latched onto the hardest ingredient to divide, eggs, and went from there. Six eggs in a dish to feed 12 meant that, in theory, going down to one egg would be perfect for two (I should know by now that my theories never quite work out) so dividing the recipe into sixths was the way to go. My lack of digital scales meant that this was largely approximation as it is pretty hard to weigh 37.5g of anything.

So to get started I made a sixth of the biscuit base and used it to fill the base of four cupcake cases (already a little off the perfect two portions that I had envisaged). On Friday I made a sixth of the cheesecake mix and filled the four cases with quite a bit left over so I decided to just fill two extra cases and have baseless cheesecakes that could be eaten with a spoon from the paper. The recommended cooking time was around an hour so, religiously sticking to my sixths, I set the timer for 10 minutes and checked, another 5 and checked again, another couple of minutes and finally the top was golden. The key to the original recipe lies in not opening the oven door during cooking or for a while afterwards and even though I know this I was stressing and so opened it, repeatedly. My cheesecakes rose spectacularly before sinking and cracking - oh well I suppose we live and learn.

Anyway, they don't look bad (although strangely like those little portuguese custard tarts) and they tasted as they should, creamy and a little lemony and definitely delicious. I will be revisiting this experiment and hopefully one day will report back with a perfected and more exactly proportioned recipe.
Posted by Gemma at Sunday, February 18, 2007

They look yummy - and yes more like Portuguese tarts - how intriguing. Yum. Anyway I'm glad the scale-down worked. They are now 'Gemma cakes'!

ooh glorious mini-cheesecakes!! i think the crack and the icing sugar are gorgeous -- it looks like a really elegant dessert, and I love that little dish too.

holler if you need Nigella's recipe for mini-cheesecakes. they are made for mini-muffin tins. they look so cute!

Looks delicious! I love cheesecake, large or small (preferably large, actually!). Glad to see you join in for SHF! It's my favourite foodie event!

Kathryn - it pretty much worked so i'm looking forward to making it a slightly more precise recipe.

Ilana - I have Nigella's recipe but I really wanted this one made mini. The dish is actually a saucer from a tea cup and saucer set!

Freya - yes I'm enjoying the foodie events so far and will definitely keep going with SHF.

Nigella and I recently got a divorce, she just wasn't working out for me...

Your cheesecake looks delicious though!

Thanks brilynn! It's a shame you didn't get along with Nigella she is one of my favourites.

Hi Gemma I am just new to all this blogger business. I saw your reference on the Nigella site. I will return here and have a good read through shortly. Yours is the first blog I have seen and hope that you receive this comment.

Wow! I am delighted that mine is the first blog that you have seen although you will see so many more and so many beautiful blogs in no time, I recommend looking at blogs through peoples links. I have had a quiet few weeks of blogging but have plans to make a lot over the next week or two so please keep checking back. Looking forward to hearing from you again!