Before we left the strawberries were just appearing, not yet quite ready, picked too early.

In New York, Brian had tiny strawberries in his apartment. I would spoon maple yoghurt into a bowl, top it with grape nuts and a handful of those deep red berries and sit back with my iced coffee. In Maine, a day that started with strawberry muffins, continued with lighthouses, lobster rolls, and local strawberry soft serve. That night we ate burgers outside, coming in when the bugs started to bite to eat strawberry shortcake. We were well looked after.

When we got back I was keeping my fingers crossed for good Scottish berries not knowing how this wettest of Summers would affect them. Sylvie, Sylvain and Ellie came for lunch that first Sunday. We ate frittata and a salad of fennel, celeriac and pumpkin seeds, which we had eaten the Sunday before, sitting in Frankie's Spuntino, enjoying the AC and a meatball sandwich before heading back out into the heat. A week later, on a much cooler morning, I had baked a vanilla sponge. A softly simple cake that I would usually cover in vanilla buttercream, and sometimes, if it's a birthday and these things are called for, dolly mixture, they just seem to fit. This time I made buttercream but, instead of vanilla, I pressed a few strawberries through my smallest sieve, maybe six or seven in all. The icing turned pink, strawberries and cream against the vanilla of the cake. We watched the final of Wimbledon, balancing slices on our knees. 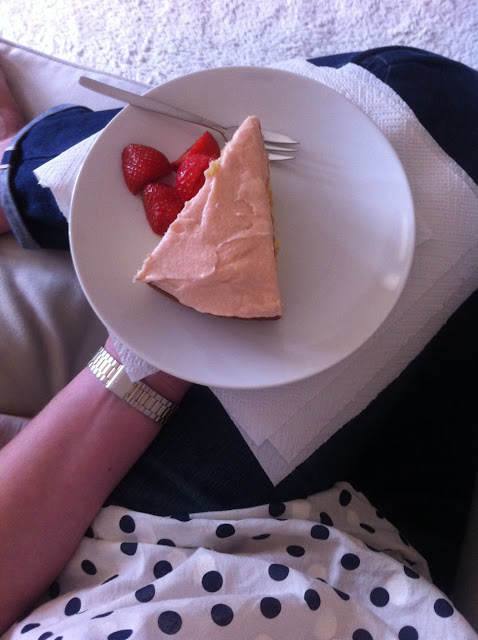 I love this line: 'I pressed a few strawberries through my smallest sieve, maybe six or seven in all' - it would make a great opening line of a book.
Also, I want to eat this cake.

Gemma, your cake looks lovely. When I want a colored icing, I add a bit of puree rather than artificial food coloring. And I learned from my mum the British way of icing much more thinly than is often seen in the US. Yes, your cake is perfect!