As I write this I am licking my lips. I am drinking a glass of wine and watching the American Idol results show instead of the final leaders debate because, on a Thursday evening, I would much rather wonder once again just what Ellen is bringing to the panel or how American Idol could possibly carry on without Simon or, how, how, Siobhan could have been the one to leave this week.

But I digress, smacking my lips...

I was on my own for dinner tonight. Chris is out. I knew I wanted to make something nice but I couldn't decide what.

I have been tossing around the idea of a quinoa salad for a few days but want to make that when we can both enjoy it.

Then I thought back a few years, to solitary evenings in Edinburgh. If Chris was out I would indulge my love of steak, dinner would be decided on with no more thought than a lunchtime trip to Crombie's. I may have told you this before but I am definitely the red meat eater in our flat. Chris enjoys it but he doesn't crave it and he is unlikely to be tempted by steak frites on a menu in the way that I, with apparent wearying predictability, am. And when I order that steak frites and he orders, say, fish it comes to the table and the plate with the fish hovers over my place while the steak hovers over his.

And, in the meantime, I had been thinking about asparagus on toast with an egg on top and couldn't quite abandon that idea either. And, if I'm mentioning influences, I should really say that I've been rereading the 'wichcraft book that I bought in New York last June.

What to do? All of it apparently. Steak, asparagus, bread (I thought the egg would be overkill but I would be lying if I said I didn't consider it). I might change the bread if I make it again. The Poliane loaf was delicious but a little too dense to properly absorb all of the juices. Maybe ciabatta so that all the salty juices pool in the generous hollows. Other than that all I have to say is yes. And now to resume the lip licking. 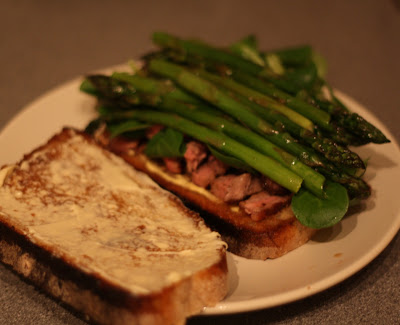 One steak (I used sirloin because there was a beautiful marbled piece at the butcher's counter)
Asparagus, quite thin stalks, as much as you like (I used about 10 pieces and ate a couple before they reached the sandwich)
Leaves (Lamb's lettuce here but use spinach, rocket, watercress, whatever)
Dijon mustard
Good mayonnaise
Olive oil
Sea salt and black pepper

Preheat the oven to 180ºC and put your asparagus onto a small tray. Drizzle with a little olive oil and use your hands to smear it all over the asparagus. When the oven is hot put the asparagus into the oven to roast for about 10 minutes.

Once your asparagus is in, heat a frying pan on a medium-hot hob and, while it is heating, rub a little olive oil into your meat and season lightly with salt and pepper on both sides.

When it is hot place the steak in the pan and cook for around 3-4 minutes per side (for medium) turning just once when the first side has had its allotted time.

As it rests slice some bread and, if you want, soak up the pan juices from the steak with the sides that will be on the inside of the sandwich. Spread one side of the bread with dijon mustard, slice the steak and place on the bread, add leaves, then asparagus. Drizzle over any juices remaining in the asparagus dish. Finally spread the second slice of bread with mayonnaise and seal your sandwich.

Now just try to eat without the whole thing disintegrating...
Posted by Gemma at Thursday, April 29, 2010

That's a superb sandwich! And an excellent example of cooking a special treat for one person.

My kind of sandwitch and yes with watercess (you can't find it here, I miss it)