I'm not always as good as I should be at taking photos of delicious meals so I'll have to give you a quick don't miss hit list of the places we loved and you'll just have to trust me...

Pearl Oyster Bar
I haven't been able to get beyond the lobster roll (buttery grilled hot dog bun piled high with lobster meat and mayonnaise with a side of crunchy straw fries) but if for some inexplicable reason this doesn't appeal then the tiny taste of Adam's halibut was great and I would have ordered it happily if it weren't for that pesky roll.

Momofuku Milk Bar
Sarah and Rob told us that we absolutely could not miss going here and ordering the pork and egg bun. They didn't go into too much detail so we dutifully ordered two buns and two blueberry beers not really knowing what would come. What we got was a bun folded over belly pork, hoisin sauce, cucumber, spring onions, and a soft fried egg. We ate while trying to avoid splattering ourselves in porky eggy hoisin wonderfulness and debated coming back later that day for round two. We bought cookies to take up to Central Park instead.

Phoenix Garden
Two years ago we were staying on East 34th St. and Adam and Renee (we have a habit of meeting up in New York, a habit to be nurtured I think) were staying a little further uptown. After deciding that we all fancied Chinese food to eat in our hotel room that evening we stumbled across Phoenix Garden on Zagat. Two years later we could remember that it was very good and we could remember that it was cheap but it took a little more digging around online to remember the name. We were visiting Adam and Renee's hotel a few short blocks away so it was an easy decision to call for a delivery. The food arrived and it was even better than we had remembered and, an extra bonus, even cheaper than we had remembered. A few nights later back at our hotel on our last night in the city Chris and I were tired and wanted food that was only available 24 blocks north and 7 east. We tried to convince ourselves that something else would work but all we could do in the end was succumb to our craving, hop in a cab, cross town, order food, go for a short walk, wait for the food while drinking a free jasmine tea, back into a cab, back across town, to sit down and look at out view and eat. We have a menu stuck to our fridge door now. Torture.

Cafe Habana
This was on my list of places to visit two years ago but somehow we didn't make it. Don't make the same mistake. Next time I'll go to the little take away place and grab an order of corn to eat while sitting on Elizabeth St. It's grilled and sprinkled with cheese, chilli powder and lime juice. I read a review describing it as crack corn and I would say that sounds just about right.

So, that's all from our trip. Now, there's a blackberry bundt cake in the oven and recipes to try. Goodbye Boston. Goodbye Providence. Goodbye Toronto. Goodbye New York. 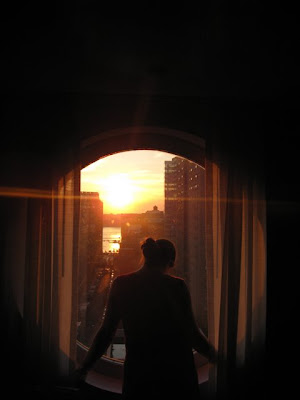 fantabulous photo
I've loved reading about your trip by the way...really really

Thanks Rachel, I love this photo as well (and loved that hotel room).

Time to start drawing up a list for the next big trip - I'm angling for the Pacific North West!