After spending lunchtime hunting for a new pasta recipe I thought I had found the perfect option - sausages, pasta, lemon, white wine, parmesan, parsley, oregano - what's not to like? I was busy planning a post in my head as I made my shopping list but somehow, between leaving work and arriving home, that simple and perfect plan had started to fall apart.

I went to M&S for some sausages but they didn't have any lemons so I planned a bus route home that would take in a stop for lemons, fresh parsley, parmesan, and wine (convincing myself that I had dried oregano in the cupboard).

So far so normal.

But then my bus went on a diversion around the streets of North London and when I looked at my watch I simultaneously realised that I had already spent 75 minutes on the top deck of the 243 and that I wouldn't get home before 8 despite leaving work at 6. I gave up. I got off the bus and walked the rest of the way home.

I popped into an off licence for wine and decided to give up on the rest in the, frankly ludicrous, hope that I would have it all in the fridge. But no. No lemons, no dried oregano, no dried chilli. The end of a hunk of parmesan and some sprigs of fresh parsley were just luck.

We ate some and we went back for seconds and while it had been sitting in a covered pan something had happened. The sausage was juicier, the flavours had mellowed. I think next time I'll just cover the pan and ignore it for a couple of minutes and hope that magic wasn't a one off. 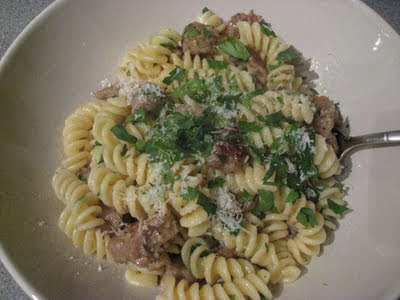 SAUSAGE FUSILLI (adapted from a recipe on JamieOliver.com)
Serves 2

Bash up the fennel seeds in a pestle and mortar until coarsely crushed and mix in the paprika, then put to one side. Heat a splash of olive oil in a heavy-bottomed frying pan. Squeeze the meat out of the sausage skins and put into the pan, breaking it up using the back of a spoon. Fry for a few minutes until the meat starts to colour and the fat has rendered slightly, then crush it once more so it resembles coarse mince (or, if you're me, until it resembles small balls of sausagemeat. Coarse mince eluded me.). Add the fennel seeds and paprika and cook on a medium heat for around 10 minutes until the meat becomes crisp, golden brown and slightly caramelized.

Pour in the white wine and allow it to reduce by half. Turn the heat down to low while you cook your pasta in a large pan of salted boiling water according to the packet instructions. When the pasta has cooked al dente, drain it in a colander, reserving some of the cooking water, and toss it in the pan with your sausagemeat. Add the butter, Parmesan, chopped parsley and a few spoonfuls of the reserved cooking water. Taste and check for seasoning, then serve with a little extra grated Parmesan sprinkled over the top.
Posted by Gemma at Wednesday, November 04, 2009

Love the addition of fennel seeds! We too like to leave our pasta to cool for a bit - it always seems to taste better.

Hi Su-Lin - I love the Italian sausages that are full of fennel seeds and including them here reminded me of an Italian sausage sandwich that we ate in a street market in New York. Yum.

Seriously? I take the 243 to my dance class! I may well have walked right past you!

But how can M&S have not had lemons? That makes no sense at all! You came up with a really tasty looking improv.