On the odd occasion when I know I'm eating alone in the evening I have a good think about exactly what I want and, sad though it is, more often that not what I want is steak. The idea that men are the red meat eaters just isn't true for us, I am definitely the more carnivorous and so a big slab of steak is mostly a solitary indulgence.

If I am buying good steak, and I am, then I want it to taste of itself so no faffing is required. I season and oil the meat, cook it in a hot pan, leave it to rest, and eat. Sometimes I have a pile of frites alongside and sometimes just a salad. Today is a frites day (I say frites but what I actually mean is McCain thin cut oven chips) and I have decided to attempt the previously unattempted, home made mayonnaise. This is on my fear list, if a recipe tells you how to rescue it when it all goes wrong it doesn't make me very positive about my chances but today I just thought why not, after all there is always Hellman's if it all goes horribly curdlingly wrong.

After a bit of rummaging I unearthed a Hugh Fearnley-Whittingstall recipe that had appeared in The Guardian a little while ago and would be perfect for finally using the local extra virgin rapeseed oil that I had bought. 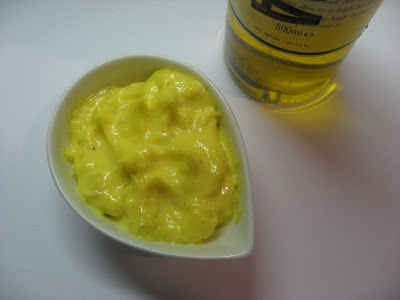 Now that I have made it and eaten it I can say this, it was easier than I thought it would be and definitely not scary. I made two changes to the ingredients, I didn't have any anchovies so I left the fillet out and I used white wine vinegar instead of cider vinegar. I had to add more salt, more pepper, and more vinegar which may have been down to the lack of anchovy and different type of vinegar. I enjoyed this mayo but I wasn't blown away by it, essentially I didn't feel like I had used 250ml of oil in an amazing way. I won't make this particular recipe again (unless you can convince me that using anchovy and cider vinegar will make a vast difference) but I will try again, maybe Delia next time.
Posted by Gemma at Tuesday, November 06, 2007

I do mayo with a combo of olive oil and extra virgin olive oil. Just love the flavour, so different from the bought stuff, although the bought mayo has its own uses where nothing else would do. I flavour mine mostly with garlic and lemon juice.

Making mayonnaise is something that I thought I would never do, however, now I do it occasionally and am thoroughly enjoying it.

Forgot you were posting every day! Are you finding it difficult? I've never made my own mayonnaise. Always thought it was too scary. Loved the sound of the pumpkin bread too.

Hi Amanda, I haven't been feeling great this week so trying to stay inmspired is a little tough but I'm enjoying the challenge. You should give mayo a go, this one was just done in the processor so zero hard work involved and I definitely recommend the pumpkin bread, the next day I realised what an amazing colour it is!

The mayo looks lovely. I'm always amazed at how much oil actually goes into the stuff!!
xx

I quite like making mayo, but I haven't found 'the' recipe yet!

Anna - I know, there can be no blissful ignorance when you make it yourself!

KJ - well if you do find 'the' recipe let me know. I might see what Nigella has to say on the subject.