I don't know about you but when I try a new recipe I am always a little nervous. There are times when I know that, even if it isn't amazing, it is unlikely to be a disaster but there are also times when I am just plain scared. If a recipe is very different to anything I have made before then the fear sets in and if it is a new bread recipe then that fear is multiplied, just count the ways it can all go wrong. I have spent the requisite hours on a bread recipe only for it to be inedible; the disappointment is magnified by all those wasted hours spent waiting for dough to rise, and the time spent scraping dried on dough off the counter is too frustrating to remember.

So, tonight I decided to try two new recipes which summed up my fears perfectly. I didn't even think about it going wrong until I got home and realised that this is dinner and that if it didn't work two hungry people would be searching the cupboards for a quick fix.

I had the flatbread recipe stored away in the recipe file that lives in the back of my brain for a while and had thought that it would accompany a basic salad with some grilled goat's cheese but then I saw the recipe for wilted spinach salad with warm feta dressing on Epicurious and decided that, yes, this would be dinner tonight.

It was a good meal but I will say this. That salad is hearty. I normally look at salads and think we'll eat more of it than the recipe says, the only time I don't is for Nigella portions. So when this recipe said serves four I thought 'well it will be dinner for two with maybe a bit extra'. No, it is big, but maybe I should have realised this all along, after all a dressing made with a whole packet of feta was never going to be anything other than rich (and delicious). It's a meal, not a side, and not a starter, unless you are very hungry or serving very small portions.

And the bread, well it says to add more flour if the dough is sticky. My dough was sticky to the point that I couldn't touch it without it adhering to my hands in a completely unbudgeable way. I must have added at least another cup of flour to get it right, so plan to have extra flour and just see what your dough does. Mine came right in the end so I have to hope yours will as well. 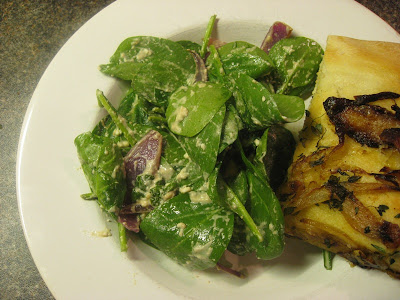 I'll refer you here for the salad recipe as I made it exactly but I amended the flatbread recipe a tiny bit.

Dough:
2 tsp of active dry yeast
1 tsp of caster sugar
1 1/3 cup of lukewarm milk
2 1/2 cups of plain flour (plus extra for dusting and extra just in case your dough is as sticky as mine)
1 tsp of table salt
1 tbsp of olive oil

Put the yeast, sugar, and milk into a bowl and mix to combine. Set aside in a warm place for five minutes or until bubbles appear on the surface.

Preheat the oven to 180 degrees C (355 F). Place the flour, salt, oil, and yeast into a bowl and mix until a smooth dough forms. Turn it out onto a floured surface and knead for five minutes or until smooth and elastic, add extra flour to the dough if it is sticky. Return the dough to the bowl and cover it with a tea towel. Set the bowl aside in a warm place for about 30 minutes or until the dough has doubled in size.

While the dough is resting add the butter and oil to a frying pan over a medium heat. Add the onions and most of the thyme and leave to cook over a low heat until the onions are soft and caramelised.

When the dough is ready put it onto a lightly greased baking tray and press it out to about 1cm thick. Top with the onions, the remaining thyme and a little sea salt. Bake for 15-20 minutes or until golden.
Posted by Gemma at Wednesday, November 14, 2007