BAKING AND WALKING FOR CHARITY

Apologies for the extended silence. After a very uninspired week I had grand Saturday plans involving a lot of baking and my first ever attempt at making pasta. However, a phone call stopped it all (except the baking but more on that shortly) in its tracks and instead we jumped in the car and headed north for the night. After a boozy night in Kinross we headed to Loch Leven castle to sit in the sun and finished off the day with fish and chips on the waterfront at Anstruther in Fife. 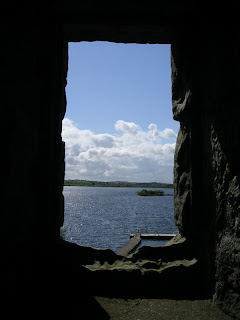 Luckily before we left I managed to get the planned and necessary baking done. I know that baking doesn't seem like the most obvious urgent task but for the past few months I have been baking cakes to sell at work. I am taking part in the Moonwalk in Edinburgh on June 16th along with three workmates and the cakes are a small part of our fundraising efforts. As Team Cupcake we are making the most of our name by baking (and eating) lots of cakes and will be wearing decorated cupcake bras on the night (not just for fun, it is one of the requirements of the walk), I may even let you see the final design. So, I made a chocolate and banana loaf using the recipe from 'How To Be A Domestic Goddess' and a gingerbread cake using Nigel Slater's recipe in 'The Kitchen Diaries'. We also had passionfruit cake, lamingtons, anzac biscuits, and chocolate brownies. I'll be baking more for Tuesday so if anyone has any great ideas feel free to share.
Posted by Gemma at Tuesday, May 22, 2007

Good luck Gemma, that is such a worthwile cause!
Your baking ideas all sound great.
xx

Fish and chips on the waterfront sounds perfect. Good luck with the Moonwalk, and as for the cupcake bras, do post a pic of the finished article, it could catch on. tee hee! Amanda

Good luck with the Moonwalk and baking :)

A great cause! Good luck with that and we look forward to seeing the cupcake bra!!

I like the picture a lot. gives me the feeling of, well, a window to the , i am not going to say world, but what lies outside the building.