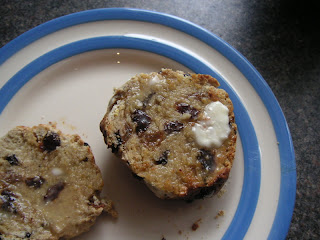 I've been enjoying hot cross buns for many years now but they have always been bought in, ready to be slotted into the toaster before slathering in butter. This year I decided it was time to make my own. After perusing a few recipes I was finally left trying to decide between two and eventually opted for what seemed the easiest from Nigella Lawson's 'Feast'. I wasn't completely sure about how well the yeast was behaving as I was making these and after baking them I have a sneeking suspicion that I should have left them to rise either slightly longer and in a warmer place or, done as suggested in the recipe, and left them to rest overnight in the fridge. Having said that, it is also possible that making them with a wedding-induced hangover wasn't the best plan as my patience levels weren't at their highest. Anyway, I understandably had a nagging feeling that these weren't going to be the hot cross buns of my dreams (you know the ones - light, golden, and looking the way they should actually look) and the feeling became reality as they came out of the oven looking like very misshapen rock cakes - lumpy, slightly rectangular, with only the faintest sign of the cross that I had dribbled onto their tops. Still, not to be too deterred, I dutifully brushed them with a sugar glaze and once they had cooled warned that they might not be the lightest bit of bakery in the world but, appearances aside, they still managed to taste remarkably like hot cross buns. True, they were a little denser than I would have liked, but the bun that I toasted and covered in butter to have with coffee this morning was actually pretty good. So, a success of sorts but maybe, next time, I'll take my time a bit more, try not to make them with a hangover, and try that recipe that sounded a little harder. I guess we'll see if that approach is any more successful this time next year.
Posted by Gemma at Monday, April 09, 2007

Well done for giving them a go.

They look very good. I forgot about hotcross buns, I dont live in a country where they are available. you have inspired me to give them a go - i am imagining the cinammon and the juicy sultanas.....

I've only just gotten into hot cross buns, having a natural aversion to dried fruit but I love them toasted and dripping with butter!

KJ - they thankfully tasted good too!

Jennifer - I only eat a couple every year but I can't imagine missing out on them! They really are so easy and worth a try.

Freya - I used to hate dried fruit unless it was in a hot cross bun or teacake but all of a sudden came round and now love it.

I found your blog from looking for hot cross buns recipes and I too thought the same things after I made Nigela's recipe. I just think letting the yeast rise first in the milk without the butter might do the trick. Worth a try.