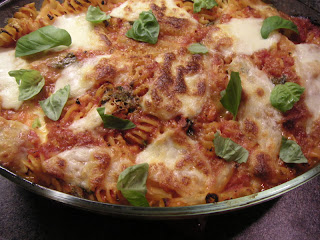 After happily buying a few Jamie Oliver books from his Naked Chef days I gradually started to be less interested in him in print, I still enjoyed his TV programmes and watched each and every series but his books were no longer a must. I debated buying each and every one but there always seemed to be something more interesting around. However, my resolve broke when I saw 'Jamie's Italy' and I decided it was time to give him another try. I watched the programmes and read with interest about the stir that he had caused by killing a lamb and then I bought the book and mentally noted a few interesting recipes. Until now though this initial interest had only translated into repeatedly making the very good pizza recipe (I have discovered that I love making home made pizza and am actually jealous of the people who have decided to build pizza ovens in their back gardens as this would definitely be my first choice piece of garden cookery kit).

Anyway, yesterday I decided it was time to finally try a different recipe, I wanted to make a simple pasta dish so turned to baked pasta with tomatoes and mozzarella. The sauce is just onions, garlic, dried chilli, tomatoes, and basil all cooked together to be later layered with pasta, parmesan and mozzarella. This came out of the oven bubbling and smelling good but I immediately realised that next time I may reduce the cheese quantities as there was a little (actually a lot) too much mozzarella, which made serving it nearly impossible as the strings of cheese stuck to the baking dish, the plates, and, at one point, my hair. Anyway, cheese overdose aside it is delicious and will hopefully be just as delicious when I go home shortly to reheat a portion for my lunch with a mental note to check my hair carefully before coming back to work.
Posted by Gemma at Tuesday, April 03, 2007

Haha. Well cheesy or not, it looks wonderful. Some people on N.com made this and there were two camps of just right cheesy or too much cheesy. I think I would fall into the latter.

LOL about the cheese in your hair comment. I saw my mom yesterday after work and she commented how I had chocolate all over the sides of my mouth. Goodness, what must the people at work think of me!!

Mmm, your baked pasta looks lovely, I like mozarella a lot :)

LOL re cheese in your hair. You too Ilana with the chocolate :))

I agree with Ilana, even if there is too much cheese it looks delicious! I have that book at home and have really enjoyed the recipes.

Hope you had a delicious lunch!

I haven't tried this, but I do think you can have too much mozzarella, so I can guess what camp I'd be in. That said, it looks yummy!

Gemma, that looks delicious!
But, really, TOO cheesy? LOL :-)

KJ - I love mozzarella too but I think there are times when even I can have too much of a good thing!

Ari - thanks, it was a good lunch.

Kathryn - yes you would probably want to cut the mozzarella back pretty drastically.

Anna - I know it is hard to believe!

Hey guys!
I find it funny the story of Jamie Oliver. the theme looks very fun and interesting. I love to hear more about it. thanks for sharing the information I love this blog.