THE YEAR SO FAR

This year started as years can, with a shocking hangover following a night of fun with friends. From there there has been a bout of tonsillitis for me, a couple of unexpectedly late nights (it's nice to know that we can still dance until 3am once in a while), gyros from a new place that made us feel like we were back in Greece and that lead to us heading home to book flights back to Greece for real. We've planned a trip to Copenhagen in the Spring and I've tried a few new recipes, roasted Brussels sprouts with salmon, cauliflower cheese baked potatoes. I went to a sewing class and started a new pottery class.

And now, after too much rain and too many dark days, the sun is shining. It may still be cold but I can take that.

And my hopes for the year? To do some sewing at home, to carry on at pottery producing wonky bowl after wonky bowl, to go to yoga and not worry too much about my lack of flexibility, to bake the occasional loaf of bread, to get outside, to have more breakfasts like this... 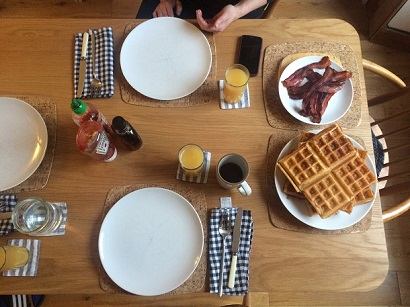