I've been meaning to write about pizza for, well, for as long as I've been making it at home. Those first few times were sporadic. I would stand in our old Edinburgh flat kneading dough on the worktop and then we would sit at the table in the red walled kitchen, the table where we used to sit listening to the radio or to music that Chris would put on in the box room and which would reach us through the little high up window that connected the two rooms. I don't think I ever made pizza in London. I always meant to but maybe there wasn't enough space, maybe there were just other options.

Last Summer I decided to start again, using the recipe from Jamie's Italy that I had always used, making a half batch of dough for three pizzas, mixing the dough in my biggest bowl, topping them with tomato sauce, prosciutto, courgette slices, mozzarella and basil.

I made pizza when Brian came to stay, arriving on the train, tired, hungry, and thoroughly fed up after being forced to stand for too long, cheered by slices of pizza and a giant cookie. I went from making three pizzas to four much thinner ones with that same half batch of dough when we made dinner for friends. There were pizzas when Molly and Brian came to stay, followed by some oddly textured brownies, granular but edible. At New Year, pizzas and brownies again (the latter just because I needed to redeem myself).

And on Valentine's Day I made pizza for the two of us, one of them turning out wonkily heart shaped, by accident (sort of), the rest of the dough sitting in the freezer for next time. 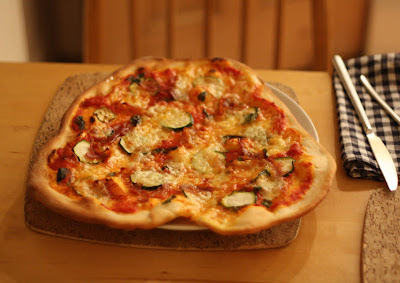 I do love a homemade pizza! I haven't made it in a while, you have inspired me.

wonderful. we use the jamie's italy recipe, too, although i think m has adapted it somewhat so i could never replicate it without tuition!

There was something so restorative about that pizza a few months ago when I came to stay -- it patched me up. I don't think I've had a pizza that has tasted as good since...

I would echo BF's sentiments: that is *some* restorative pizza. Exactly what I needed after my run-in with Psycho EasyJet Guy. Thank you again for that...