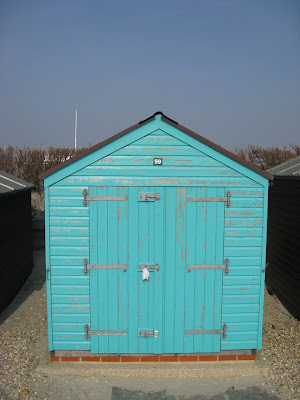 The one consolation was that by the time we left the sun had gone in. It hasn't been anything other than blustery March weather since.
Posted by Gemma at Wednesday, March 25, 2009

How lovely! Perfect way to spend a weekend and it really was beautiful. The boys go to West Wittering on a school day out every year, it's not too far.

I know that feeling, not wanting to leave, hatching up complicated travel plans for monday morning just to stay another night.
Roast lamb and roast new potatoes in the garden sounds perfect.
I love the blue beach hut.

I am now sitting here with freezing feet and I can hardly believe that last week we were barbecuing! Your weekend sounds idyllic.

Amanda - it is such a lovely beach isn't it. Just a shame the road down to it is a nightmare in the summer. Oh well I'm still looking forward to a swim in warmer weather, we didn't get many (or any) chance to swim in the sea in Scotland.

Rachel - do we ever want weekends to end? Nice weekends away just make it all a bit worse.

Foodycat - I know, I didn't think it would do this two years in a row but it has. As long as it doesn't rain for our move on Saturday...