If you like baking then at some point you are bound to find yourself volunteering.

Charity cake sales roll around and I find myself balancing cupcakes and loaf cakes on the bus trying my hardest to avoid icing sticking to the tin.

Birthdays come and the night before I find myself elbow deep in flour.

Working in Edinburgh there were five of us who could be relied on to produce cakes for any occasion, and sometimes (often) for no occasion at all. Sometimes the sheer quantity of birthday cake tipped into ridiculous but we ate it and we enjoyed it. Of course we did. Four out of five did the Moonwalk in 2007 and raised money by baking cakes to sell every other week. Banana bread, lamingtons, sponge with whipped cream and fresh passionfruit, brownies, cookies. Everyone was a little bit sad when the Moonwalk was over and the excessive baking stopped.

Then last March I moved to London and to my new job and someone's birthday rolled around and out came the boxes from M&S. Apparently I no longer worked with bakers so if I wanted cake to be homemade (which I did and do) then I would have to provide it.

So on Thursday evening I broke out the chocolate to make the quadruple chocolate loaf cake from Feast. 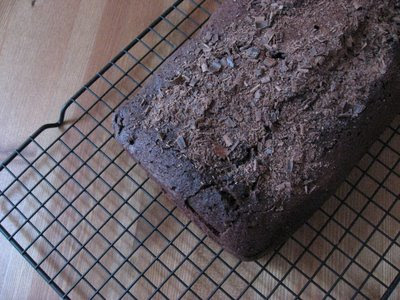 In a last minute fit of laziness I abandoned the syrup (even though I know it is delicious), it was pretty crumbly without and I think it's probably better to include it. It was good, although, to be honest, being the lone baker can be an embarrassing experience. I can only take so many people saying 'wow, Gemma, did you make this?' before the part of my character that hates anyone examining anything I do too carefully starts saying that maybe M&S cake isn't so bad after all. Maybe after a few more birthdays they will get used to it.
Posted by Gemma at Saturday, February 28, 2009

Be proud to be a baker!

I have one person in my office who is gifted at raining on others' parades. After her response to my last baking effort "Really? Youy baked? Why would you do that?" I pretty much decided that she doesn't even warrent M&S and she can have Tescos cakes.

I would love it if someone made cakes where I work, especially if it looked this good!

Foodycat -yes, she clearly only deserves one of those overly sweet cakes with fake buttercream and fondant that hurts your teeth. At least my colleagues appreciate the effort!

Sam - maybe you should start the tradition?

Ooooh. I know that cake. It's fab. I once made it with pesto, mind. It got spilled on the chocolate and somehow didn't quite wash off. The cake was surprisingly edible, otherwise I'd recommend it for the killjoy colleague above.