Isn't it ridiculous that something that should be made with care and cooked softly over a barely there heat could be reduced to such a throwaway name?

I suppose it fits the Dolmio vision of bringing the Italian out in you through opening a jar but the slow and steady approach is so much better.

Among all the other childish food likes and dislikes I have already introduced you to mince was right up there with strawberries. It probably doesn’t help that it was usually paired with something tomato based but I think it was the texture that really got the gag reflex going. One traumatic experience left me at the dinner table having eaten the pasta that had been untouched by the dreaded ragu and piling the foul stuff into a roll to try and eat some of it in a cunning disguise. It didn’t work.

So, when did this all change?

I think I had lasagne and realised I liked it and then gradually realised that mince was not the devil's work and that, while raw tomatoes may still be an abomination, in cooked form they are actually quite palatable. From there it was only a small leap into the unknown to say, hey, maybe I'll cook us bolognaise for dinner tonight. I remember the day and I remember the internet search. I remember finding this article online and knowing, because when has Nigel ever steered me wrongly, that this was the recipe I would make. I made it and the conversion was complete. 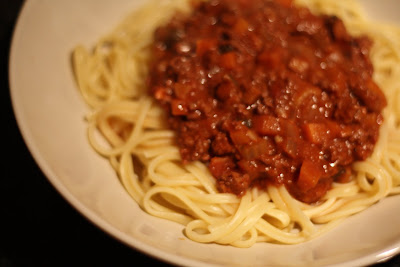 So when the recipe appeared in The Kitchen Diaries I was delighted. I used to have just about enough time to make this from scratch after work. Now that my journey to work is no longer a short ten minute walk this sort of post work cooking is, sadly, not realistic. Instead, in a rare moment of ultra organisation, I made this on Monday evening. I got home from work and chopped and cooked and left it to bubble away slowly. I popped it into the fridge overnight and on Tuesday we had a quick dinner of a slow cooked dish. In a rarer moment of ultra organisation I even had the forethought to cook a little extra linguine so that I could have more for lunch the next day.

Now the trick is to remember how easy this was..
Posted by Gemma at Sunday, January 25, 2009

i swear to god, i just switched on to blog for the firt time this year and it was going to be about spaghetti bolognaise. damn it! :-) x

That looks delicious - lovely pic. One of my favourite meals, although i haven't cooked it for ages. Glad Nigel's recipe is a good one - he has never disappointed me!

I agree slow cooking is by far the bast way to cook this. Nigel Slater's recipes are great, I've never been let down yet.

I am so glad I was not alone in this, will happily eat mince now but for most of my years growing up I dreaded it, wouldn't even touch lasagne, yet alone bolognese etc! When I met the other half I got thrown in deep end as he is Italian and his family are forever having lasagne/ bolognese dishes, it was that or starve and now I lurve lasagne / bolognese etc!

Lisa, Sam - yep, yet to find a dud NS recipe

Anne - phew, always good to hear that it isn't just me!

I've always loved mince, but I used to be 100% with you on the abonination status of raw tomatoes!! Those slimy pips that just got everywhere... eeewww. My entry into the world of tomatoes was definitely sun-dried tomatoes, and now I happily eat them raw too :)

Spag Bol is one of those deceptively simple dishes. Yes, you can throw it together in 10 minutes but it will taste like shite. Slowly and lovingly cooked, it is a thing of true beauty...

Jeanne - well I like sun-dried tomatoes and like sauces now. I have been known to eat a little raw tomato but only the flesh. No juice and definitely no seeds!