After at least a few months of eager anticipation I bought Nigella Christmas on the day it was released. I must have been in a funny mood the day I bought it because when I looked at it I was hugely disappointed, I just couldn’t get over it. I looked through my new book, which should have been my pride and joy, and couldn’t get passed my initial impression that it wasn’t as good as I wanted it to be. I put it down and waited for the weekend to have a good read through and, relief, I fell in love. I want it to be Christmas now, I want to throw Christmas parties with an overabundance of food in candle lit rooms, I want Nigella’s Christmas china, I want her little reindeer salt servers, in short I want it all.

There is one problem with this. It is October. It isn’t even late October. I can’t start making Christmas food. I’m not about to start stirring up a pudding, feeding a cake, and drenching dried fruit in copious quantities of brandy for mincemeat. So what did I do? Simple, I made granola. Cranberry, almond, and honey granola from the brunch chapter to be more precise. I mixed together oats, sugar, cinnamon, salt, almonds, sesame seeds, sunflower seeds, honey, and a little oil. I baked it until it was golden brown and the whole flat smelled of cinnamon and then popped it into a jar ready to be eaten for breakfast. I’m going to make a double batch next time. 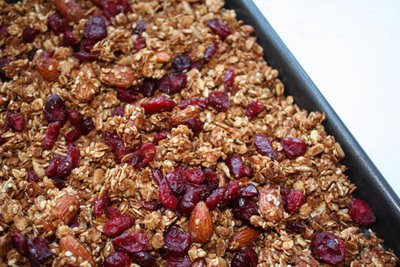 I would love to start the day with a bowl of this!

I wanted it to be Christmas now as well!

I have this maarked, it look so good, mmm.

I made this granola too - I'll be making a double batch next time :)

I have been in a festive mood ever since I bought this book! I really want those gorgeous red bowls and plates.

Have you made Andy's Fairfield granola from Feast? How do you think the Christmas version compares? I was thinking of making granola for a breakfast party I'm having next week, and I'm not sure which version to go with!

Sam - you should give it a try. I've already run out, oops!

KJ and Nickki - I know, so impatient for it to be December already. I want the plates with the deer but they are very expensive.

Sarah - yes I've made the Feast granola and love that as well and was always fond of the chocolate version of it. This is very cinnamonny and the cranberries make a nice change so I would give it a try.

That looks really really good! We made our first granola a couple of months ago. Plan was to make some every few weeks... Plans eh? Who needs them when it's christmas soon?! Shrieks madly... ;)

That tends to be my granola plan as well, I make it and love it but somehow forget to make any more for a few months - silly really.