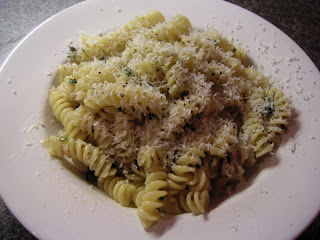 Over the years I have had my fair share of kitchen disasters. I have made inedibly salty bread (don't ever try to guestimate 5g of salt), attempted disappointing recipes, forgotten to add the eggs to a cake, and enjoyed chickpea mush that should have been fritters. I am a natural born worrier, if it is a part of my life (and sometimes even when it isn't) I'll worry about it and the consequence of disasters, no matter how few and far between, is that trying something new makes me nervous, particularly when that something new is not written down in trustworthy book form.

So with some trepidation I approached the hob to try a pasta cooking method that I first heard about last May while reading Chocolate & Zucchini. I had stored this away in my head for future reference and, when it finally resurfaced from the disorganised chaos, I mentioned it to Chris who said that his Mum cooks pasta in stock using this method. Well, we had some homemade chicken stock in the freezer (speaking of kitchen disasters I'll come back to my frozen stock one day soon) so I defrosted it and got cooking.

With a pan of hot stock keeping warm on the hob, I measured out enough fusilli for the two of us, added a teaspoon of oil to the pan to coat the pasta and then added enough stock to just cover the pasta, handily enough this was exactly the pint of stock that I had defosted but I suppose it depends on the pan you use. I left the pasta to simmer and absorb, stirring occasionally and topping up with water from the kettle as the stock disappeared into the pasta.

While the pasta was busy cooking I started thinking about how to dress it up a little. I peeled two garlic cloves and popped them into the pan with the pasta to start infusing it with garlic. I left them in there for about five minutes, then fished them out and dropped them into a smaller pan with a knob of butter and a pile of thyme leaves. I heated this so that the butter would melt and the thyme would soften with the taste of garlic adding to this pan as well. When the pasta was cooked (which took longer than boiling pasta but not a lot longer, just keep watching and stirring occasionally and top up with liquid as necessary) I took the garlic cloves out of the butter and thyme sauce and threw them away and added the sauce to the pasta. Served with a little black pepper and some parmesan I think this method will be making frequent reappearances on our table.
Posted by Gemma at Friday, March 02, 2007

Interesting! I wonder if it would work with homemade fresh pasta? I know that cooks much faster so probably not. I like the idea of it, anyway - specially if it allows you to eat dried pasta so simply.

Oh and I've had my share of disasters. My first ever try at chocolate cookies resembled cowpats (that was a long time ago but still)... I find now I'm more confident things tend to work, and then I get a big shock if they fail!!

What an inspired idea! Looks lovely!

Kathryn - I'm not sure if it would work with fresh pasta I guess part of the appeal lies in the time that the dried has to soak up all of the stock. I definitely recommend it though.