After a very productive first blogging week, a few busy and pretty annoying days at work scuppered my ability to cook and post. Following a few uninspired days at the start of the week, on Wednesday I finally knew exactly what I wanted to eat that night - chickpea fritters with garlic and herb yoghurt in pitta bread. Off I went and bought tinned chickpeas, coriander, onion, garlic, a chilli, some Greek yoghurt and some pitta breads (I briefly toyed with the idea of making flatbreads but this was not the week for being elbow deep in flour). When I got home all of the fritter ingredients (chickpeas, fresh coriander, dried coriander, dried cumin, garlic, a large red chilli, and an onion) went into the food processor and then the mix went into the fridge to sit for a while.

In the meantime I stirred together the yoghurt with some minced garlic, sea salt, dried, and fresh mint and popped that back in the fridge. By this point, and clearly on a cooking roll, I had a remembered a dish of baked feta which we ate in a Greek restaurant a couple of weeks ago. I thought this would match the fritters nicely so took some feta out of the fridge (I always keep feta and halloumi in the flat), drizzled it with a little olive oil and lemon juice and sprinkled over some finely chopped red onion before wrapping it in a foil parcel to go into a medium oven. I checked on it a few times as I had no idea how long it would take to properly soften but it was eventually around 20 minutes. This was a definite success and will be repeated, probably more often than is healthy.

Now, with the frying of the fritters, we move onto the real point of this story. I carefully shaped little patties of the mixture, heated some oil in a large frying pan and dropped them in one at a time. At this they promptly started spitting so madly that I had to grab an apron and my oven gloves to be adequately protected from the very painful little drops of spitting spicy oil. Now fully gloved up, but wishing that I owned some protective goggles, I had to turn the fritters. The first one fell apart, then the second, then the third... by now I was trying to accept that my lovingly crafted mix was, maybe, a little too soft to hold together. I persevered and tried to keep them looking like fritters before admitting defeat and deciding to just scrape the contents of the pan into a bowl to see if it was at least still edible. 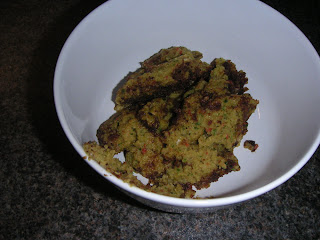 Clearly not the most attractive bowl of food but, joking apart, I may resurrect this semi disaster as 'hot spiced chickpea dip' as it was actually really tasty. We spread it on the pittas, topped it with the yoghurt and some salad and tucked into the feta on the side and decided that for a kitchen disaster it had turned out pretty well.

Thankfully Thursday evening required zero inspiration. It was Burns Night and so we celebrated with haggis (meat for him, veggie for me as I am not a fan of offal but 5 minutes ago just managed to hold it together to take the giblets out of a chicken to make stock so I am not a complete kitchen wimp), neeps and tatties - delicious.
Posted by Gemma at Thursday, January 25, 2007

I have had fritters fall apart too, Gemma! I seem to be (touching a lot of wood) managing them at the moment, but disintegrating fritters seems to be a perpetual risk. I don't know uf you have Jamie's new book but the courgette fritters in there are nice (mine didn't fall apart - hurrah); I also like Bill Granger's sweetcorn fritters (can't remember which book they are in).

Anyway glad it tasted nice as a dip.

As for the Burns night dinner - I don't blame you on the vegetarian haggis. I have had the real McCoy, a taste of it, anyway, and it tasted good, in fact, but it's the thought of it that puts people off.

chickpea fritters are tough!! it seems like they inevitably fall apart unless they have a strong binder. Bill also has a chickpea burger recipe that has chickpea flour in it.

Sorry it didn't work out but glad you had a tasty meal neverthless.

I love chick peas but if the mixture is a bit too wet, try adding a bit of flour to the actual mix and handling as little as possible (i.e. using a spoon to form them and a slotted spoon to drop them into the oil).
I have haggis in our freezer that I must use up!
Freya

Thanks so much for the cookie today (and to the boy Docherty for resisitng the understandable temptation not to share). I had it at lunchtime with tea and it brought a little sweetness to another predictably sour day. Flippin delicious. And pecans are very probably my favourite flavour of nut.

I look forward to reading about your further recipe adventures, so cook on! (and thanks again).