Clearly NaBloPoMo and I are not going to get on very well this year.

Ah well, even if I'm not quite managing every day I am at least managing to post an awful lot more than I have in recent months.

Our friends Sarah and Rob are coming to stay. We visited them in Toronto in June and they've decided to move to London. They've found a flat close to us but it isn't free until early December so until then they will be with us which will mean being a lot more organised if we are to feed four people out of our tiny kitchen.

So, yesterday we cleaned and today I spent the day finishing off a few things around the flat and pottering about in said kitchen.

First a batch of cranberry, almond, and honey granola for us all to have for breakfast this week with yoghurt or milk.

Next some root vegetable soup - onion, celery, carrot, parsnip, turnip, potato, bay, stock and a parmesan rind which had been sitting in the fridge being forgotten about for far too long. I had planned to boil, blend, cool and store the soup but after tasting a spoonful I had to sit down with a bowlful straight away, the parmesan brought creaminess and a savoury something that made it more than a simple root vegetable soup.

As I write this Nigel Slater's spaghetti bolognese is simmering on the hob. Enough for us to have for dinner with leftovers for the freezer.

Before I started on that I decided there was time for a cake. Mid November seemed as good a time as any to pull Nigella's Christmas off the shelf. After perusing the pages and mentally bookmarking some recipes to try in the run up to Christmas I decided to make a vanilla cake. I'm saving it for tomorrow so I'll let you know how it tastes but, in the meantime, the flat smells of vanilla and baking. Never a bad thing. 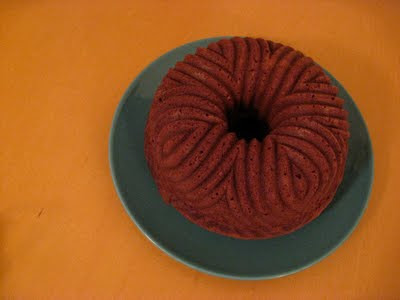 Preheat the oven to 180C/350F/Gas 4 and place a baking tray into the oven to heat. Grease a 2.5 litre/4 pint 8fl oz bundt tin very liberally with butter or flavourless oil.

Mix the butter and sugar together in a large bowl with a wooden spoon or hand blender until light and fluffy. Add the eggs, one at a time, whisking each one in with a tablespoon of the flour. Carefully fold in the remaining flour and the bicarbonate of soda using a large metal spoon, then fold in the yoghurt and vanilla extract until well combined. Pour the mixture into the prepared tin and spread until level.

Place the tin on the preheated baking sheet in the oven and cook for 45-60 minutes, until well risen and golden-brown. After 45 minutes, push a metal skewer into the centre of the cake. If it comes out clean, the cake is cooked.

This cake looks fantastic. I love a simple cake - bookmarking this for later!

vegetable soup, spaghetti, this cake...lovely.
I think you are doing just beautifully on the blomoponogo thing perfectly imperfect.

Thanks Rachel - that makes me feel a lot better!

Hope you enjoy it Jenny

I can't believe you got that cake to turn out without sticking! Well done!