I would love to tell you that I was traumatised by mushy Brussels sprouts as a child.

I would love to jump on the ‘I grew up being forcefed watery stinky sprouts’ bandwagon.

I would love to wax lyrical about my conversion to the religion of the sprout.

But I can’t as it simply isn’t true.

My Mum doesn’t mind sprouts but neither does she like them enough to try to force feed them to us. The same goes for cabbage. Over the past few years boiled sprouts have appeared on the table at Christmas to appease other people who insisted that sprouts were as much of a Christmas necessity as leaving a mince pie out for Father Christmas but most of us (me and my sister) would just act as if they weren’t there.

I had dismissed them as soggy, smelly, and stupid to prepare with their silly little crosses in the bottom. Chris tried to tell me that in his house sprouts were different but I may as well have been holding my hands over my ears and singing ‘I can’t hear you’ at the top of my voice for all the notice I took.

Then, last year, I made this pasta and, oh, it was good.

Then, at Christmas, I bought one of those pretty sprout trees (branches?) and gave the sprouts the briefest of boilings so they were a vibrant green and still slightly crunchy alongside the roast and, yes, still good.

So, I am now an enthusiastic sprout eater to the point where, last night, I cooked some sausages and to go with them melted a little butter in a frying pan, added some pine nuts to brown, then piled in lots of halved sprouts along with some salt and pepper and a little olive oil. I cooked them until they were just softening but still with a definite crunch. We ate up every one. 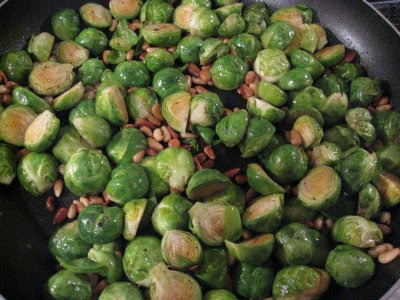 Mmm, looks a lot like the way I usually do sprouts, although instead of pine nuts I have shallots and garlic. How can anybody not like them when they're done like this??

I'm afraid I love even the boiled to death and stinky sporuts, but these sprout recipes will definitely be given a go. Pine nuts. Who knew?