Over the last few weeks I have been witnessing the slow spread of Christmas through the shops. But this week, post Halloween, it has sped up noticeably until, yesterday, while buying some satsumas and water in M&S I noticed something previously unseen, packs of two mini yule logs sitting innocently beside the bottles of water just begging to be slipped into my basket. Oh the cruelty. I can kid myself that flapjacks are healthy (with difficulty, but I can) but I cannot convince myself, much as I might want to, that little packs of thickly chocolate coated chocolate sponge rolls with chocolate cream inside are a good idea for anything other than a very occasional treat.

So, to strengthen my resolve on mornings when all that chocolate may seem like a very good idea indeed I decided to inject a little chocolate into my breakfast. This recipe is from Feast and is a variation on Andy’s Fairfield Granola that has been pretty uniformly raved about. The chocolate version uses dark cocoa powder for its chocolate kick so you can almost, almost, convince yourself that this is a virtuous thing to be eating while watching BBC breakfast news and drinking coffee. 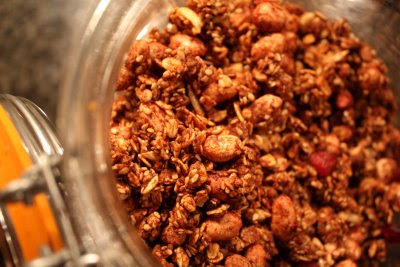 CHOCOLATE AND PEANUT GRANOLA
Makes enough to fill a large jar, about 2.5 litres

Preheat the oven to 170°C. Mix all of the dry ingredients together in a large bowl then add the wet and mix thoroughly, I usually use two large spoons, before pouring into two large baking trays. Bake for approximately 40 minutes. I check it every ten minutes and move the granola around every time so that it all has a chance to toast. Take it out of the oven and leave to cool. It will harden into chunks that need to be broken up before it is poured into a jar for storage. I had some leftover dried cranberries from my last batch of granola so added those once the granola was cool. I like this in a bowl with milk but have been known to get excited by a bowl of granola with Greek yoghurt occasionally as well.
Posted by Gemma at Wednesday, November 05, 2008

OMG - chocolate granola. There goes my diet ;-) SOunds absolutely wonderful and I'm going to have to try it.

Btw, here's some NaBloPoMo inspiration for you - I've tagged you! http://www.cooksister.com/2008/11/the-commenters-meme.html

Chocolate for breakfast! I am going to try this.

Thanks Jeanne. I'm going to do this meme this weekend, it's a great one.

Sam - and it's healthy(ish) chocolate for breakfast so even better!

this is one of the healthiest and delicious recipes I've made so it has helped me a lot in my diet.