Following last week’s pasta I have been tasting those leeks again every time I think about them. Trust me this is a good thing. So, somehow, while reading a cookery book over breakfast this morning (Sophie Conran) I decided that this Monday night would be leek tart night.

Deciding what I want to make and working out how to make it happen is still relatively new territory for me. I have spent too long not trusting my food instincts and thinking that straying off the beaten (recipe written in a book or magazine) path will leave me with food welded to dishes, looks of disappointment all round, and a dash for the takeaway menus. Thankfully I have decided to abandon these wimpy ways.

On a side note I have been quite well known for wimpishness over the years. I was accused of it at school for not wanting to wiggle my bum in the middle of the playground (would anybody out there honestly go back to their school years?), by my Mum for screaming in terror at her reckless steering of a sledge in the Swiss Alps, and for generally just shying away from anything where the outcome could involve pain (apart from wearing high heels, although that’s better since discovering the tip of putting ibuprofen gel on the balls of your feet).

So back to the abandonment of recipe wimpishness and leek tart, it was good by the way... 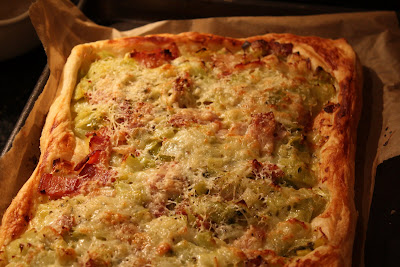 LEEK, BACON AND GRUYERE TART
Serves 2-4 depending on appetite (in case you were wondering tonight it served 2)

3 large leeks
50g of unsalted butter
Small pile of thyme leaves
2 tablespoons of cold water
6 rashers of smoked streaky bacon (optional, I just had some to use up)
About 50g of grated gruyere (I didn't weigh it and just grated enough to scatter over the top of the leeks and bacon, 50g is an educated guess)
250g of puff pastry
Salt and black pepper

Slice the white and light green part of the leeks in half along their lengths and then chop into rough 1/2 cm pieces. Melt the butter in a large heavy based pan over a medium heat, add the leeks and thyme and stir to coat in the butter, then add the water. Lower the heat and cover the pan. Leave this to cook over a low heat for about 20 minutes before removing the lid and leaving some of the excess water to evaporate.

While the leeks are cooking preheat the oven to 200˚C and place a baking tray on a middle shelf to heat up.

Chop the bacon and fry until cooked and slightly crisped. Roll the pastry out on baking parchment into a rough rectangle and score a border about 1 cm from the edge.

When the leeks have finished cooking spread them into the centre of the pastry and add the bacon and gruyere along with a sprinkling of salt and pepper. Brush the pastry border with some of the buttery juices left in the pan that the leeks were cooked in.

Put the tart (including baking parchment) onto the preheated baking tray and bake for around 15 - 20 minutes or until the pastry is puffed and golden.

Serve with a green salad. 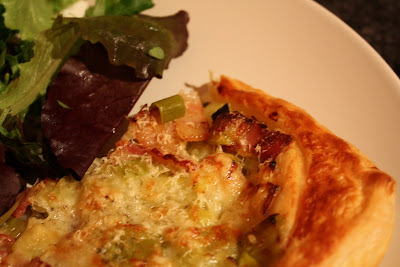 Mmmm this sounds right up my street and looks great :-)

Everything about this tart sounds delicious!

Thanks both, it was yummy.

Ibuprofen gel on the balls of your feet - who knew? Marvellous tip. The tart looks delicious too! x

Yep worked a treat in my mega heels at the wedding! x

OMG, that's hilarious! Ibuprofen on the balls of your feet! I'm also a well-known wimp around these parts, but my wimpiness extends to killer heels. With recipes, though, I've usually been pretty un-wimpish :)

This looks delightful - such a classic combo of flavours!

No, I would not go even one day back, especially not back to school!
The combination of leek, gruyere and ham is a heavenly one. You can't go wrong.

Sounds very yum, the tart. Not the foot part, or the school part. But the tart part, mmmm :)

Jeanne - seriously it works, It was a tip from a girl who loves skyscraper heels so I knew it was a keeper!

when i am cooking i usually add bacon because the taste is really delicious. Actually the bacon for the breakfast is really good i enjoyed a lot. Although the ingredients of the meals be simply if you chose the right ones,the taste will be wonderful.