A RED ONION TART AND SOME BIRTHDAY BAKING 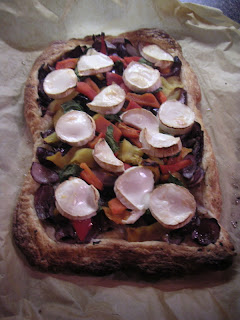 So, another slightly off week but do not fret (she tells herself) the end is definitely in sight and I can clearly see a time when I may be able to not only cook meals after work but may also be capable of taking photographs and writing posts about them. With that in mind I am formulating some rather late New Year's Resolutions to entertain myself and hopefully you, but more on those over the next couple of days.

In the meantime evening meals continue to be fairly easy options. Last week I remembered some left over puff pastry from the onion tart of a few weeks ago and decided to experiment with a caramelised red onion, roasted pepper, basil and goats cheese tart (this was the safest kind of experiment because, really, how could puff pastry with buttery onions, peppers, basil and goats cheese taste anything other than fab). I slowly cooked 4 red onions in some butter until they were soft and caramelised. At the same time I put 2 whole peppers under a high grill to blacken their skins - when this happened I popped them into a bowl covered with clingfilm to make it easier to remove the skins. When the onions were cooked I rolled out the pastry and scored a border around the edge, pricked the base all over with a fork and filled it with the onions, the skinned and sliced peppers, some fresh basil leaves and some slices of goats cheese and put it into a high oven for 15 minutes. A large green salad with a wholegrain mustard dressing provided our usual accompaniment to this type of meal.

After a quiet week in the kitchen I somehow managed two batches of birthday baking over the weekend. On Saturday night we were headed to a birthday party and I decided to bake a little gift of the custard cream hearts from Nigella Lawson's 'Feast'. They looked fab but as I have never made them before and managed to resist tasting one before wrapping them up in a box I can't really say much apart from this. I'll have to make them again soon.

I can, however, say that the vanilla cake from Tessa Kiros's 'Apples for Jam' is absolutely delicious. I made it to take to work for a birthday and it was wolfed down disturbingly quickly. It is a very simple vanilla sponge that could be easily dressed up but I followed the instructions for a vanilla butter icing softened with a little milk and it was beautiful. It was one of those cakes that reminds you exactly why home made is best.
Posted by Gemma at Monday, February 05, 2007

The tart and the cake both look delicious. I've not tried Tessa's cake yet, but it sounds like I should. I love that sort of tart - absolutely gorgeous food.

Hope your week is less hectic!

Good for you experimenting with recipes! I'm not very good at pulling recipes out of my brain, I NEED to follow a recipe LOL

I haven't tried the vanilla cake yet, but will do, one day!