One of my baby step resolutions is to stop remembering really simple recipes to try and then promptly putting them to the back of my mind. Believe it or not this is my first shepherd's pie. They were a staple of my Mum's cooking and my heart would sink whenever one appeared on the table. Don't ask me why but I had an irrational hatred of all food involving mince. Anyway, time passes and I grew up and came to realise that mince is actually a good thing and I made bolognese, and lasagna, and I said yum but somehow shepherd's pie and cottage pie stayed on my mental to do list

So, the weekend came and flicking through Tamasin's Kitchen Bible I found the shepherd's pie recipe and decided to finally make the leap. I reduced quantites of the mince to 500g but left everything else the same which resulted in slightly too much liquid in the pie and a volcanic eruption as it bubbled up around the edges of the potato but aside from that, and the equally volcanic temperature when we first took a bite, it was delicious and, sorry Mum, way better than the shepherd's pies I remember (although that is probably just my inner fussy child speaking). 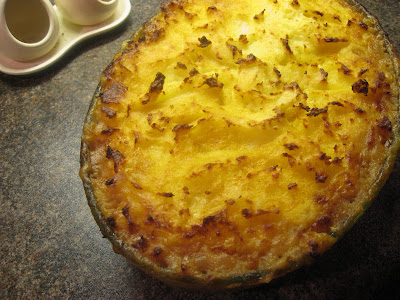 Funny, but I got the craving for shepherds pie the day before yesterday - hadn't had it for ages, but just HAD to make it again!!!

Happy New year to you
xx

I also notice you have the salt and pepper piglets, how cute! I have them, but don't use them much - I think they are pretty rather than useful, or maybe that's just our clumsy hands keep knocking them over, lol. Do you find them practical?

Thanks Anna, it is just the sort of comforting food we need with the horrible January weather.

Sarah, thanks. No, I don't really use them. I use my big salt pig for maldon salt for cooking but we have a little pot of fleur du sel that comes to the table for seasoning along with the pepper grinder. I would love to find a good alternative use for them though as they are so cute.

I haven't eaten shepherd's pie for years either, as it doesn't really appeal in our hot climate here. Yours looks very scrumptious though, the potato topping so fluffy ... yum!

I love Shepherd's Pie. I also really like it when the gravy bubbles up through the potato in places so think this would have been a big winner in my book too.

I have always been intrigued by shepherds pie. Your post has renewed my interest and I am going to give it a try.