THE FIRST ASPARAGUS OF 2007 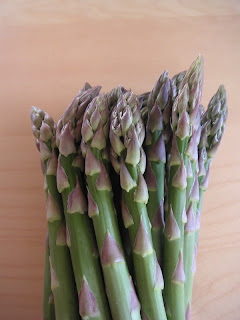 I was very suspicious of vegetables as a child. Actually I was suspicious of most things as a child, so cautious of new things that my Mum had to hang new clothes in my wardrobe so I could get used to them before I would wear them (I'm making up for that now). Anyway, if it wasn't potatoes, carrots, peas, or sweetcorn then I wasn't about to eat it. Then, one day, asparagus became a part of this list for one simple reason - melted butter. My grandparents would occasionally come to stay during prime asparagus season and they would go to one of the local farm shops and would buy gorgeous fresh asparagus. They would boil it until it was just cooked and then we would have it with lashings of melted butter. I think there is something to be said for getting children to eat vegetables by serving them with melted butter but I'm not sure the cardiologists of the world would agree. So, after many years of eating asparagus I wait all year for the British season. I don't want year round asparagus from Peru, I want British asparagus in May and June and I want lots of it. Last night my first asparagus of the season was served with a side order of chicken and Jersey Royal potatoes. I put some butter on the asparagus and I ate spear after spear after spear. My future asparagus encounters this season might be a little more restrained, but only a little.
Posted by Gemma at Thursday, May 03, 2007

Mmm, local asparagus. I'll have to have a look and see, the farmers market is next weekend - so hopefully then.

Make the most the season, I say!

I love asparagus. I need to get to the farmers market to get some!

KJ - I had some farm fresh asaparagus at the weekend as I was in Sussex and it was so tasty.

Freya - I know, the seasonal veg that I go absolutely doolally over are few and far between but I always make the most of them!

Kristen - I have a long overdue date with the farmers market, I think I'll go and see what goodies I can get this weekend.

Gemma, I really enjoy asparagus when it's been wrapped in prosciutto and roasted a la Giada!
Yummy!

Also, just to let you know I've tagged you, hope you'll join in - check out my blog!
xx