I've still got three posts to write about Greece (and it might be more considering how much I'm struggling to cut down the file of photos). But, in thinking about Greece I find that I can't write any more without writing about my Aunt who loved it there and whose funeral we went to yesterday in Chester.

I wonder whether it is hard to get someone so right on the day that is there for saying goodbye. Or, whether it says something about who she was that it was so right, that it came through at the church, the crematorium, in the pub afterwards as we stood in the sun: her love for her family that came above everything; her smile, that was in the photograph on the altar but, more than that, is in our heads in all our memories of her; her warmth; her strength; her love for Greece, for the holidays taken there year after year, for the planning that started as soon as the last holiday had ended, her joy in the planning almost as much as in the holidaying. My cousin, Mark, chose the music for the crematorium and as the curtain closed, and as Zorba the Greek started playing, smiles appearing around the room, breaking through the tears, there could have been no better choice.

Uncle Simon said a few words before reading a poem at the mass. He said that Aunty Di, of the nine of them, of which my Mum is the fourth, of which Aunty Di was the sixth, five brothers, four sisters, that she was was the best of them. And when I think of her, think of that smile, think of the love that she had for everyone in this extensive family, the love that shone out of her every time I saw her, all I can think is that she was the best of us all.

Aunty Di, we love you, we'll miss you, this one's for you. 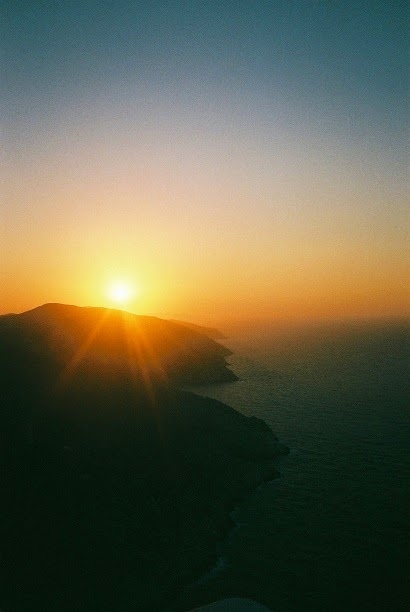 I am very sorry for your loss - she sounds lovely!

Gemma I'm so very sorry, but what a wonderful tribute, that photo is beautiful.