Where have I been?

I've been here, I've been working and reading and watching TV, I've been around and about on a course through work, I've been reading the new Nigel Slater book and falling in love with him all over again, I've been watching the same lovable Nigel making his simple suppers and Jamie travelling around America, I've been getting sucked into the new series of Gossip Girl, succumbing to finally reading Twilight and enjoying the Millennium trilogy, I've been listening to The XX on repeat and when it isn't The XX it's Phoenix, I've been wondering whether I'm right in thinking that it used to be a lot colder at this time of year when I would have been bundled up in layer upon layer to go to a bonfire.

There has been a lot of soup and pasta recently, too much. I need to force myself back to it again, remember that I love it, remember that when I write this blog I love that too, I love feeling that I can do this, that I can keep it going.

Most weekends I wake up early. I may sit around and read for most of the morning but I'll probably be awake by 8.30. Last Saturday I slept and I slept and I slept. I thought my eyes were opening but then they would fall close with a thud. That isn't like me. When I finally got moving I did something that I haven't done for much too long. I went to a new cookery book, I wrote a shopping list and I went to the supermarket with a plan, a plan that involved beetroot in vast quantities. I pulled on some disposable gloves to avoid the Lady Macbeth look and I got to work. We had beetroot and lamb mince meatballs for dinner that night and while we ate there was a beetroot seed cake cooling on the worktop waiting to be drizzled with lemon icing and scattered with poppy seeds. There is nothing better for prodding me back to life than a bit of quiet Saturday baking.

It's been all quiet on the cooking front since but it's a start and, with that start in mind I've decided to return to NaBloPoMo for the third year running. Year 1 was a failure of epic proportions, year 2 was a modest success (definitely a few filler posts), and year 3, well, fingers crossed so wish me luck. 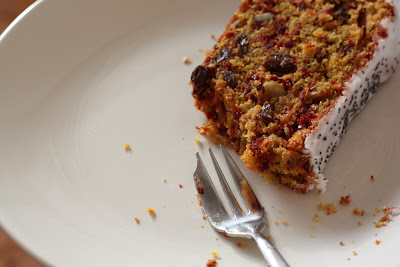 BEETROOT SEED CAKE (from Tender: v. 1: A Cook and His Vegetable Patch by Nigel Slater)

Nigel says 'this tastes no more of beetroot than a carrot cake tastes of carrots, yet it has a similarly warm earthiness to it. It is less sugary than most cakes and the scented icing I drizzle over it is purely optional. The first time I made it I used half sunflower and half Fairtrade brazil nut oil, but only because the brazil nut oil was new and I wanted to try it. Very successful it turned out to be, too, not to mention boosting everyone's zinc levels'. I had macadamia nut oil sitting in the cupboard which really needed to be used so use it I did. I have no idea how much if it affected the taste of the cake but it was good. Serves 8-10.

Sift together the flour, bicarbonate of soda, baking powder and cinnamon. Beat the oil and sugar in a food mixer until well creamed then introduce the beaten egg yolks one by one, reserving the whites for later.

Grate the beetroot coarsely and fold into the mixture, then add the lemon juice, raisins or sultanas and the assorted seeds. Fold the flour and raising agents into the mixture while the machine is turning slowly.

Beat the egg whites till light and almost stiff. Fold gently but thoroughly into the mixture with a large metal spoon (a wooden one will knock the air out). Pour the mixture into the cake tin and bake for 50-55 minutes, covering the top with a piece of foil after 30 minutes. Test with a skewer to see if done. The cake should be moist inside but not sticky. Leave the cake to settle for a good 20 minutes before turning out of its tin on to a wire cooling rack.

To make the icing, sieve the icing sugar and stir in enough lemon juice or orange blossom water to achieve a consistency where the icing will run over the top of the cake and dribble slowly down the sides (about three teaspoonfuls), stirring to remove any lumps. Drizzle over the cake and scatter with poppy seeds. Leave to set before eating.
Posted by Gemma at Saturday, October 31, 2009

It is so encouraging to me to know other people get a little burnt out of blogging/cooking. However, that said, I am SO EXCITED that you're doing NaBloPoMo, if only because I'll get to enjoy your days of posting. You can do it! Can't wait to read here every day. :)

I can't wait to have Tender on my bookshelf, I flicked through a copy when I was back in London but My suitcase was already far to heavy..... I shall buy it when I am back in Nov.
This looks lovely and my sort of cake.
onwards are upwards with the NaBloPoMo and I hope you cook somemore things from Tender.
Nice to have you back x

Good to see you back! The cake looks good but I am really excited to read about the meatballs!

Thanks Shannalee - I'm looking forward to getting back in the blogging groove!

Rachel - you're going to love Tender, it is such a beautiful book but no surprises there...

Foodycat - thanks! The meatballs were delicious but I didn't take any photos so may have to make them again soon.