Apparently we have been in the grip of severe weather conditions.

Now, to me it just feels like a cold winter but I suppose there is nothing better for avoiding the economic crisis than wasting news time debating how parts of the UK are colder than Greenland and warning people to wrap up.

It is still cold though, I won’t and can't deny that, and I cursed myself more than once this week for wearing stupid ballet pumps. My big toes are still recovering from the cold. I just need to go and get some thermal tights with sheepskin lined feet instead. Do they exist? No? Well they should.

Aside from the fantasy shopping opportunities such chilly weather brings there are cheaper options for keeping warm. Soups and stews come into their own in January, like the edible equivalent of a hot candlelit bath and a good book they suit the gloom of the New Year when spring seems to be a long way off and there is little to look forward to. Every so often, usually when the weather changes, I pull The Kitchen Diaries off the bookshelf and see what Nigel recommends for the time of year. This time his 1st of January dish became my 6th of January dish and I made a pot of squash and dal soup with a spiced onion topping. It was warming, just spicy enough, and left me with enough leftover to freeze and the remnants of the onion and squash to mix with some feta for lunch. The packed lunch project rolls on and dinners like this make it so much easier. 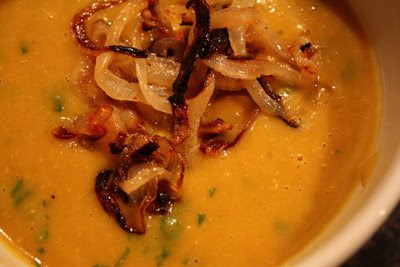 Dal and pumpkin soup
From The Kitchen Diaries by Nigel Slater

a small onion
2 cloves of garlic
a walnut sized piece of ginger
225g of split red lentils
1 teaspoon of turmeric
1 teaspoon of ground chilli
250g of pumpkin (I used squash and roasted the whole cubed squash in the oven so that I would have leftovers for lunch)
small bunch of coriander, roughly chopped

For the onion topping:
2 medium onions
2 tablespoons of groundnut oil
2 small hot chillies (or large mild ones if, like me, you are pathetically intolerant to the heat of chillies)
2 cloves of garlic

Peel the onion and chop it roughly. Peel and crush the garlic and put it with the onion into a medium sized heavy-based saucepan. Peel the giner, cut it into thin shreds and stir that in too. Add the lentils and pour in one and a half litres of water. Bring to the boil, then turn the heat down to an enthusiastic simmer. Stir in the ground turmeric and chilli, season and leave to simmer, covered, for twenty minutes.

While the soup is cooking, bring a medium-sized pan of water to the boil. Peel the pumpkin and scoop out the seeds and fibre, then cut the flesh into fat chunks. Boil the pumpkin pieces for ten minutes, until they are tender enough to take a skewer without much pressure. Drain them and set them aside.

To make the onion topping, peel the onions and cut them into thin rings. Cook them in the oil in a shallow pan until they start to colour. Cut the chillies in half, scrape out the seeds, and slice the flesh finely. Peel and finely slice the garlic and add it with the chillies to the onions. Continue cooking until the onions are a deep golden brown. Set aside.

Remove the lid from the lentils and turn up the heat, boiling hard for five minutes. Remove the pan from the heat, then add the drained pumpkin. Put the soup through the blender (for safety, a little at a time) until smooth (I used a hand blender and kept it in the pan, much less treacherous), then pour it into a bowl. Stir in the roughly chopped coriander and check for seasonng. Nigel says he finds this soup likes a more generous than usual amount of salt.

Serve in good deep bowls with a spoonful of the spiced onions on top.

That looks so good and I like the sound of the packed lunch too.

please keep them coming! Im going to pop out and buy the ingredients for this after work!!!! Thank you. When you say good books - do you have any recommendations - im just about to do an amazon shop!
Happy new year
Jennifer

I can still rely on the excuse that I grew up in a temperate country where the temps fluctuated between abotu 10C and 25C, no more - to me it bloody felt Arctic! And to be honest it was definitely the longest period of sustained cold I've experienced in 8 years in London. Saturday at noon, the car's temperature guage refused to go over -1C! As you say, great excuse for a warming stew/soup. I also love turning to Kitchen Diaries for seasonal inspiration :)

Thanks for the reminder about this recipe, it has been too long. I don't know about packed lunch envy but I've got TV envy reading your latest posts - you don't appreciate how good BBC and channel 4 until you live in Italy, TV is so bad here we don't bother with a TV.
Oh and Moro envy too
Happy new year by the way

It was yummy Amanda - I thoroughly recommend roasting squash for lunches.

Hi Jennifer - I'm probably a bit late for the book recommendations but if you like food writing try Ruth Reichl.

Jeanne - I suppose Edinburgh winters toughened me up! Having said that after I hit publish on Saturday I went out and couldn't bear to be outside it was so cold - serves me right I guess...

Hi Rachel - Happy New Year to you as well. Having attempted to watch TV in France I can happily appreciate how good I've got it so I sypathise.

Yum! Looks delicious! I picked up some red lentils at the weekend forgetting I already had some lurking in the cupboard, so this is perfect timing - thank you!