I have been out of action again but, miraculously, this time it is actually because I have been preoccupied (obsessed) with something food based (to the extent that I was dreaming about it, frequently).

Before moving to London I offered to bake a wedding cake for Chris's sister. When I told people the responses tended to go 'is it a fruit cake?', 'have you ever done it before?', 'are you decorating it yourself?', and finally and most importantly 'how are you getting it to Edinburgh?'. My responses went something like this 'no it's a sponge', 'no, I've never done this before', 'yes, I am decorating it as well', and 'on the train'. At this point most people looked slightly concerned for my sanity and as the weeks went by and the words from Peggy Porschen's 'Romantic Cakes' started to permanently etch themselves on my brain I started to become slightly concerned for my own sanity.

So baking week dawned and with it a shopping trip for, amongst other things, 36 eggs and 3 kg of butter. I baked all day and got a bit bored of making the same cake six times. Monday came and I trimmed the cakes, layered them with raspberry jam and vanilla buttercream before covering them in a blanket of the same buttercream. At this point the smallest cake looked a bit wonky, the middle one looked great, and the largest looked monstrous and impossible to move. Day 3 of the great cakeapade and I was kneading marzipan. It is not easy to manoeveur enough marzipan into place to cover a 25cm cake tier without cracks appearing and needing to be glued back into place. Thankfully just as I was starting to panic the small sensible part of my brain said 'it's marzipan, no one will see it, just get it as level as you can and that will be fine', I stopped fussing, wrapped up the cakes and put them into their special cake transporting heavy duty cardboard boxes. All I can say is that three tiers of cake is a heavy and cumbersome thing to try to move on public transport.

Against all the odds we all (the cake was acquiring a personality of its own by then) made it to Edinburgh relatively unscathed and just in time for me to take over another kitchen to ice the cakes. Once again I rolled and I covered and each cake instantly acquired one side called 'the back'. Day 5 and I covered all 4 base boards with ribbon before wrapping each cake with thick ivory ribbon. Of all the tricky things to do this was, surprisingly, one of the trickiest. I needed at least one extra hand, maybe two to be safe. With a bit of assistance the supporting dowels were trimmed to size and the cake was assembled into 2 sections ready to be fitted together the next morning.

On the 4th July we rushed out to collect the cake topper and head down to the venue. I left the cake with instructions for putting it together with a special note not to tip the flowers at all as the arrangement included a precarious test tube of water which would soak the cake at the smallest encouragement. Home and time for hair and nail appointments. Miraculously the sun shone all the way through the outside ceremony and drinks. At 6pm we were back at the venue where I dashed through to the back to see the cake to check it was all ok before anyone else saw it. 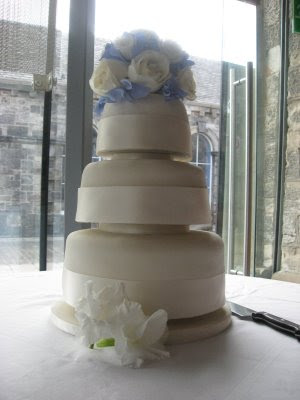 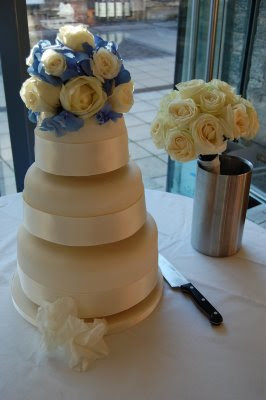 Is it bad to say that my heart swelled a little when I saw what I had created? I stopped seeing the lumps and bumps and just saw one glorious whole. It was cut and it was eaten and by the time we left Edinburgh on Sunday there was hardly any left. Would I do it again? Maybe, but only for someone very very special.
Posted by Gemma at Monday, July 14, 2008

...and it was delicious. Many more slices than were really necessary or frankly polite were consumed by me. Well done Gemma!

I'm Alisha from Wowzio, and I'm excited to tell you about our new widget platform that helps bloggers increase readership and create more engaged users.
I wanted to reach out to you to ask for your feedback on these widgets (feel free to also install them on your blog, if you feel they are a good fit).
You can check out widgets customized for your blog here:
Wowzio Widgets for your blog

I'm sorry for leaving this message via a comment, it's not at all our intent to spam you ( which is why i'm leaving this comment on an older post and you can always remove this comment ).
Again, we would love to hear your feedback.